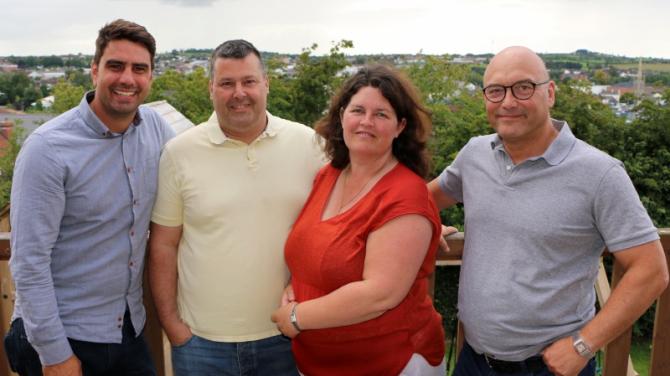 A BANBRIDGE family will appear on television this month in an episode of ‘Eat Well For Less’.

Wedding videographer Gary and his wife Louise, a teacher at New-Bridge Integrated College, were spending up to £270 on their weekly groceries and school dinners.

Gary said they were spending too much on butcher’s ready meals and takeaways, as well as branded cereal and coffee.

They wanted to save money and lose some pounds by eating more healthily.

And since their time on ‘Eat Well for Less’ the family of six have slashed their bill by more than £100 a week - with the savings going towards a new caravan.

Gary said: “An email came around Louise’s school that they were looking families from Northern Ireland to take part in the show and Louise said it would be a good idea that we put in for it.

“We applied and there was a couple of emails from the BBC sent back and forth then we had a Skype call with our four children, Sam (16) Harry (13) Teddy (4) and Eleanor (3).

“The BBC then sent a team over to do a test day’s filming and then the producers in London said we were the type of family they were looking for.”

Filming with the McKinstry family ran over last June and July at their Banbridge home.

The BBC filmed over nine days from around 7am in the morning to 8pm.

Gary said: “Gregg and Chris were both great craic and Gregg was always telling jokes. Because the filming was quite long it was great to keep the momentum going and everyone’s energy levels up.

“They also did some filming in New-Bridge with Louise teaching and me at the gym in the leisure centre. They were also in Fred Elliott’s Butcher’s, the Rosehip Cafe and Tesco Extra with us doing the big shop.

“Greg and Chris watched us doing the big shop and then jumped out and surprised us. They reckoned we were spending between £250-£270 a week on groceries including school dinners and takeaways too,” Gary said.

Gregg and Chris then showed Gary and Louise how to cut their weekly food bill by cooking from scratch and changing brands.

“They showed us a couple of recipes to use and I made pea soup and wheaten bread. Louise made a fish recipe on the barbecue.

“They also sent us away for a drive on a Sunday and switched over the brands in the cupboards and took out all the branded stuff and then put their own stuff in.

“Some of the stuff they did keep the same to try and trick you. We have stuck to most of the swaps and the changes are paying off.”

The Banbridge man said taking part in the popular show has had a massive impact on their weekly spend.

They have also adopted permanent changes to what they eat as a family and make more of an effort to be organised.

Gary added: “We definitely eat fewer takeaways and have stopped using branded products. Before we were buying four cans of Heinz beans at £2.50 whereas now we buy the Tesco own brand which are four for £1.

“Coco Pops normally are around £2.70 and the Tesco own brand are £1.20 and the kids eat them just the same and they are half the price.

“I was buying Nescafe Gold Blend before and I have swapped it for Tesco Gold, although I noticed the change straight away I am used to it now.

“We really did want to get back to cooking from scratch and before we were using Dolmio bottles for bolognese. When it’s made from scratch it tastes so much nicer and fresher.”

The McKinstry family will appear on ‘Eat Well For Less’ on Thursday (11 October) at 8pm.