'This driving challenge was my late dad's dream' 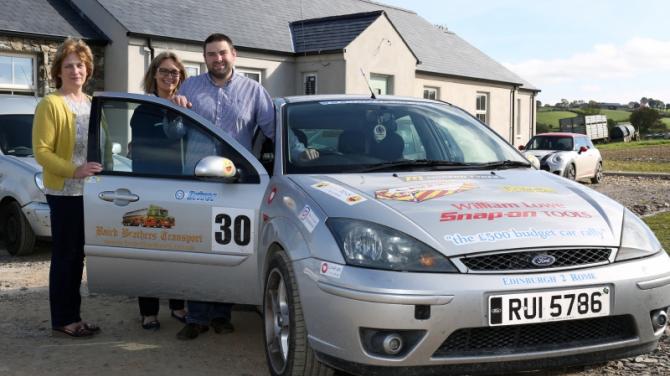 A LOUGHBRICKLAND man has fulfilled the last wish of his late father.

It was Kyle’s dream to take part in the Rust to Rome challenge, an ambitious challenge to take a rusty banger worth no more than £500 on an almost 4,000-mile journey through Europe.

Together, the father and son brought a second-hand Ford Focus in the hope of completing the challenge.

However, Kyle (pictured right) passed away in November 2017 before he could take part in the Rust to Rome challenge with his only son.

“This challenge was something we were both interested in. With dad, I panic bought this car from a seller in Gilford and bid them down from £520 to £420. But when we got it home, we discovered it was full of holes and I spent five months rebuilding it.

“Dad would have liked to have done the challenge but it just didn’t happen. He would have enjoyed the whole rebuild. He got to see the car going into the garage but then he took unwell.”

Kyle, the director of Baird Brothers Transport and a mechanic, passed away in the Cancer Centre of Belfast City Hospital surrounded by his loving family in November 2017.

Seeing the dedicated work of the hospital staff, the family decided to raise funds for the cancer centre.

Kyle’s daughter Helen hosted a coffee morning in her new home in Dromara over a week ago and truck mechanic Gary (30) decided to go ahead with the challenge in memory of dad.

Accompanied by his friend Lee McWhirter and Lee’s wife Roisin, they shared the driving raising over £5,000 for the charity.

This brings the donations raised in memory of Kyle to around £12,000.

“I just couldn’t believe we had raised so much. I thought we might raise £1 for each mile but we went far beyond that. People were very generous and I’d like to thank them. Family and friends really were very good.

“Also Modern Tyres in Newry sponsored four tyres and a spare and also tracked the car, they couldn’t have done enough for us. Also William Lowe from Snap On was very generous too.”

Gary was waved off on the challenge by his mum Norma, sister Helen, niece Erin and nephew Andrew from South Queensferry, Edinburgh.

The trip from Edinburgh to Rome over 14 days took in some of the most stunning scenes in Europe. But it wasn’t without its hiccups.

“On the first day we clipped a pothole and damaged the alloy and had to drive on a damaged alloy for the rest of the journey,” Gary said.

“And on the last day, we had just reached the finish line at the Colosseum when we broke down.

“My sister Helen, my nephew Andrew (aged four) and my cousin Amanda flew over to meet us. It was lovely to see them at the finish.

“That night, however, we tried to start the car and it wouldn’t start. The fuel line had burst. We ended up trying to fix the car at the hotel and some of the ones who were taking part in the challenge all helped out. Thankfully we were able to repair it and get on the road again for the final 1,000 miles.

“Helen bought a fridge magnet of the Colosseum as a souvenir and now Andrew points to it and says ‘That’s where Uncle Gary broke down!’”

And after all its exploits, the Ford hasn’t been put into retirement just yet.

“I use it now as my daily driver to get back and forth to work,” he said.

“The trip was certainly memorable. I did think of dad while on the road, it was emotional at times.

“I’m just glad we were able to raise so much for charity. I’m planning to do the challenge again next year!”