‘Prodigal Daughter’ from Drumgath is bringing her Australian wine home 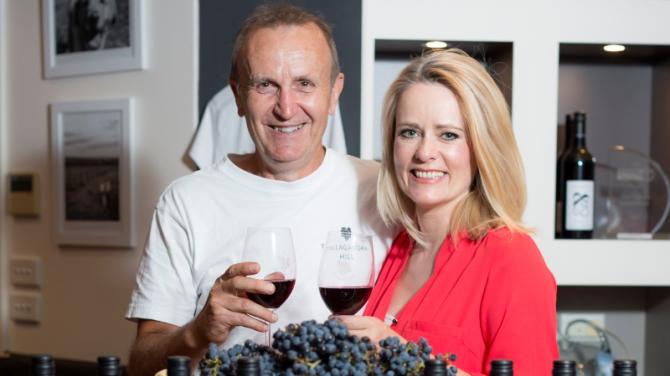 IT’S a long way from life on Elm Farm on the Ballykeel Road, Rathfriland.

But Mary McAvoy is finding similarities with her newfound career as a wine producer in Australia.

The hard work needed is the same and an old Massey Ferguson 35 similar to her late father’s even makes an appearance!

Their winery is set over 38 acres described as a boutique single vineyard with 12 acres under vine.

Based in Gundaroo, it is 30 minutes north of Canberra, the capital of Australia, and incorporates a restaurant and cellar shop on site running alongside the growing, fermenting and bottling operation.

“I am 18 years in Australia but I would say it’s only really in the past two years that I’ve felt, ‘yes, this is home now’,” Mary said.

“I think it’s because I am back to the country, back to farming in a way - it’s giving me that connection to home that I hadn’t felt before. I loved Sydney but this is something different.

“Our neighbour brought some sheep on the neighbouring field the other day and I said to my brother Michael that the smell just brought me straight back to Elm Farm.”

Mary grew up in a farming family on Elm Farm near Drumgath, the youngest of eight children of Eva and the late Pat McAvoy.

She was a pupil of St Patrick’s Primary, Mayobridge and Sacred Heart Grammar before graduating from Ulster University Jordanstown with a degree in Consumer Studies.

Mary set off backpacking around the world with a friend in 2000. While in Australia, she spent three months working behind the scenes of the Sydney Olympics.

“That was it really. We’ve been together ever since,” Mary said.

Frederik, the Crown Prince of Denmark, also met his future wife Mary Donaldson at the 2000 Sydney Olympics prompting Mary to joke: “I was standing on the wrong side of the harbour!”

The couple married two years later and there was only one option for Mary.

“Of course, we had to marry at home. Forty to fifty Aussies all came over and set up home in Hilltown before the wedding.

“We were married in Armagh and the reception was in the Ballymascanlon. It was such a great time.”

Mary decided to retain her maiden name: “I did say to David, half-jokingly, I am giving up my country, I am not giving up my name!”

The couple set up home in a four-storey terrace house in the Inner West area of Sydney considering their household very much “Australian/ Irish”.

The couple had a backyard “the size of a car park space” with not a blade of grass and have graduated to being the proud owners of a 38-acre rural site.

But their journey from desk jobs to life on the farm was an accidental one.

Both had successful careers in the city with David working for 30 years as a brand and marketing consultant, travelling overseas to share his insights and Mary had carved out an illustrious career as an event manager.

“We didn’t see this coming. We have always enjoyed sampling different wines from around the world and were big fans of Australian wine and had a underground cellar in our old home.

“David’s son Ben works in real estate and posted details of Tallagandra Hill Winery on Facebook. I commented, saying David would love that and he said he’d said the same thing to him. So we said we’d have a look.

“I looked at the house for about two minutes because I felt it was someone else’s house and didn’t think it was for us. Then I thought, ‘what a great place to live’ and we decided to go for it. It was really out of the blue and it all happened within three weeks.”

It was a big decision but they haven’t regretted the move.

“There is something kind of wonderful about growing something, then making something unique and putting your fingerprint on the product in a way that people can value,” David said.

“We have such a passion for what we do and value the stories behind our wines.”

The couple - who are grandparents to Connor, Daniel, Addison and Austin - regularly visit Co Down, spending every other Christmas at home.

Mary admits to harbouring a dream to return home to Co Down and David remarks that Mother Nature may make it possible.

“With climate change, it is looking more and more likely that you could grow grapes in Co Down so who knows!”

At the moment, they are desperate for rain at Tallagandra Hill Winery.

“We are just coming out of winter and there has been a drought with no rain since May. Strangely the vines don’t really need too much water but we need water for the house, restaurant and the cellar door we have on site. At the moment we are bringing in water by tanker.”

Tallagandra Hill Winery is based in Gundaroo and its cooler climate has led to an evitable reputation for distinctive wines.

“We have cold winters and four very distinct seasons. This is important in a growing sense,” David said.

“The grapes take longer to ripen, pushing more flavour into the juice, giving the wine a distinct flavour and we think a better quality. It’s different to other wine-making regions of Australia in this regard and we’re very proud of that.

“We live quite close to my family who live in Canberra but are a long way, unfortunately, from family in Co Down.”

But the links to Mary’s home areas of Rathfriland and Drumgath are proudly celebrated in the branding of the wines themselves.

The couple wanted each wine to reflect something of themselves.

“We wanted the wines to have a character which reflected our communities, our story and the people close to us. That’s something quite unique.”

The Vermentino is named ‘Prodigal Daughter’ with a silhouette of Mary’s profile featuring on the label.

And the Rose wine is called ‘Eva’ after Mary’s mother Eva McAvoy.

Made from the Cabernet Franc grape, the wine is named after family matriarch who they describe as “gentle of spirit, robust of character with a joy for life”.

They brought a bottle of wine home for Mrs McAvoy in the summer.

Mum just loved the idea. She doesn’t really drink alcohol but was chuffed. But she hasn’t opened her bottle yet, it’s sitting pride of place at home!”

Another popular wine from their vineyard is ‘The Great Ron’ named after David’s father, Ron Faulks. He passed away shortly before his 96th birthday on the day they finished handpicking the grapes for this 2017 Shiraz.

The Tempranillo is named ‘The Favourite Son’ featuring the silhouettes of David’s sons Ben and Sam. Although the couple joke that their favourite son is often their much-loved dog Mac!

Creating wine is a real labour of love for the couple from planting, nurturing and ultimately harvesting the ripened grape varieties to preparing the fruit for fermentation and the bottling of the finished product.

Cultivating grapes is “pretty full-on” according to David and requires plenty of manual work and vigilant observation.

“You are constantly required to do things with the vines, it’s a year-round process,” Mary said.

“But we’re enjoying it. It’s good to be working the land.”

But to help in the whole process, one Christmas, David presented Mary with a very special gift.

“He bought me a 1961 refurbished Massey Ferguson 35. I was thrilled!

This was the tractor my father had, he passed away when I was 14,” Mary.

“It was the tractor I learned to drive on. To me, it was just the most perfect gift and it’s so useful on our farm.”

It took time and effort for David to source the tractor but it paid off.

“I think I got it right. My friends were saying their wives wanted jewellery for Christmas but my wife was delighted with an old tractor!”

When starting up growing the grapes, they consulted the McAvoy family for some farming tips.

“And the McAvoys, being McAvoys, were very keen to give their advice!” David said.

“These are not just good wines, they are connected to the community of Co Down and our Australian experience,” David said.

“With all the great advice we’ve been given and Mary’s influence, we like to think there’s a little of Co Down in every glass!”

Tallagandra Hill Winery, which had been operating for over 20 years, has been under David and Mary’s ownership for two years with the anniversary falling last Wednesday (10 October).

The burgeoning interest in sampling wines from across the world is meaning more and more wine lovers are intrigued by offerings from this boutique winery.

And local wine connoisseurs won’t have to make the long journey to Oz to sample the wines including the Rose named after local woman, Eva McAvoy.

David and Mary have arranged for the wines to be shipped over to her two cousins’ businesses in Co Down, the off licence within The Milestone owned by Tom and Ann McAvoy, Rathfriland and The Whistledown Hotel owned by Colum and Sarah McAvoy.

And David is delighted that they are able to bring their wines over to Mary’s home county.

“In Ireland and Northern Ireland, there is a real culture of wine. People have a strong interest in wine and highly sophisticated palates,” David said.

“We just couldn’t be more excited about bringing our wine to Co Down.”

The couple were over in June and are hoping to return in December to officially introduce the wine with a tasting night in The Milestone.

The wine is currently making its way to Dublin arriving on 27 October.

“We just want people to enjoy our wines as much here as our Australian friends do!”