Banbridge mum on her little miracle who was ‘born fighting’ 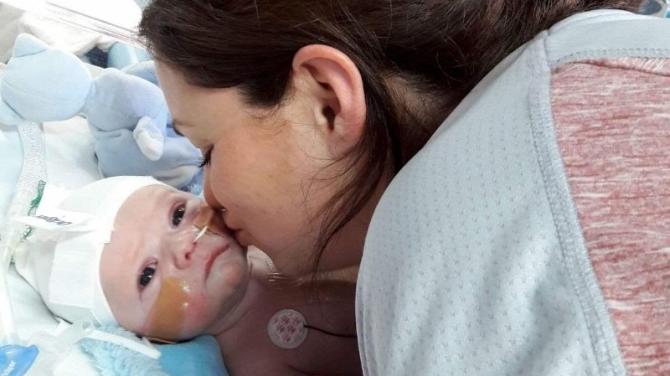 A BANBRIDGE mother hopes her seriously ill baby can enjoy his first Christmas at home.

The youngster, who is given 10 different medications a day, has already endured two major heart surgeries, suffered two cardiac arrests, a mini stroke and a bleed to the brain.

His mum, Christine, says her little boy is a “true miracle” and she lives each day with him to the fullest.

The mother-of-three spoke to The Outlook about her brave son and the ongoing support she has received from the Banbridge community.

Christine said: “At our 20-week scan we were told that Frankie had very severe congenital heart disease.

“It was a big shock for myself and my husband Ian as we lost a little girl called Beau at 22 weeks before that. We already know what it’s like to bury a wee baby.

“We were in Craigavon Area Hospital when we had the 20-week scan and from there we were moved to the Royal for the rest of the pregnancy.”

Since there was no immediate treatment available in Northern Ireland for Frankie after his birth on 28 March, doctors told Christine that the outlook was bleak.

The little boy also has a rare condition called Situs inversus which means his organs are reversed and in the wrong place, including his heart.

He only has one working ventricle and Atrioventricular Septal Defect (AVSD) which means there is a hole between the atria and between the ventricles.

“We were told that I was just going to give birth to him and see what would happen. However, I had a natural delivery and Frankie was born crying.

“I was able to hold him before he was taken away to neonatal and he didn’t need oxygen when he was born. If we didn’t already know he had complex needs, you wouldn’t think anything was wrong. He was born fighting,” Christine said.

Since Frankie was born well, Dr Casey from The Clark Clinic at the Royal sent all of his scans over to Birmingham as his treatment plan was too complex for Dublin.

Frankie was then flown over to Birmingham on Easter Sunday and continued to do well.

However, things took a turn for the worse just as Frankie was given a date for his surgery.

“I have really good faith and I believe that everyone who was there that night needed to be there when he went into the cardiac arrest.

“The team from PICU were already on the ward with another baby at the time and they swept him down to ICU and he needed resuscitated with CPR,” Christine said.

Frankie had 10 minutes of CPR, followed by a further eight minutes before he came round – he was only 10 days old.

Christine added: “There were at least 10 professionals around him at the time, putting in a central line and working on him too.

“We were there watching this the whole time and were told we could leave in case it was too upsetting to watch – but there was no doubt about it, we weren’t leaving his side.

“The community nurses who come out to him now can’t believe that he came through that as he was only days old and babies that small often don’t recover.

“Frankie had surgery the next day and the doctors fitted an artificial vessel, repaired his valve and also widened his artery. This was the first stage of single-ventricle palliation for Frankie.

“He took poorly after his operation and he had to go back to Birmingham as his oxygen levels started dropping and was fitted with a stent but it didn’t work and had more open heart surgery and given a wider vessel.”

Baby Frankie is airlifted to hospital in Birmingham.

Frankie is set to have three operations to his heart and has already had two open heart surgeries.

The Wilson family spent most of their summer in Birmingham where Frankie was treated at the children’s hospital.

Christine added: “The first time we went to Birmingham we were told that 50 per cent of babies with Frankie's needs die before they reach their final surgery.

“In this last surgery in July the consultant said Frankie should be good for six months then he will go back for the Glenn procedure - that is the second stage of the surgery.

“His heart will never be fixed, and essentially Frankie was born dying. We don't know how he will be when he gets older, but for now he will get very tired easier.

“We just take each day as it comes and he is well most of the time, though Frankie would have quite low oxygen levels.”

Christine says she is just thankful for the days that she has now with her baby boy.

“Frankie is now six-and-a-half months old and he smiles at everyone and everything. We were at the Royal recently and another parent said that he was just magical, which he really is.

“Frankie is fantastic, and is just a wee miracle. We are just so thankful to have the days that we do with him.

“Nobody knows what the future holds for him, we just enjoy each day with him. My older boy would say that he doesn’t want Frankie to die, but I told him that at some stage everyone has to.

“It has been five months now since we were in hospital and we are hopeful that Frankie will be able to have Christmas at home with us before he gets unwell again and needs more treatment,” she added.

The Banbridge mother also spoke about the support she has received from the local community.

She added: “Tracey Dunlop organised a fundraising event in Banbridge for Frankie in the Bannville Hotel called ‘Frankie’s Rock’ and that raised funds for us being able to bring my other kids over in the summer time to Birmingham where we spent a number of weeks.

“Funds raised also went towards Birmingham Children’s Hospital and Ronald McDonald’s House for families who were staying with their children who were getting treatment and all we had to do was give a £25 deposit and the rest was taken care of.

“We have had really good support from Leesa Hamilton who gave us toys for Frankie. The support we have received locally has been overwhelming actually and it’s unbelievable.

“Frank Simpson also took a great deal of time measuring up and helping me decide on a new floor and the vinyl I ordered took longer than Frank had anticipated.

“He courteously rang to let me know when it should be in and also told me that for the inconvenience and for Frankie's bravery that he would be doing it for nothing. We were blown away by his generosity.”

Christine also praised the work of the Children’s Heartbeat Trust.

She added: “They have been fantastic and the Clark Clinic is now like a second home to us, although we are just hoping for this Christmas at home.

“The whole town and community have been praying for Frankie. Even when he was poorly, he was just so happy and when he is well he has a good quality of life - that’s all we want for him.”

Cuddles from his doting big brothers.