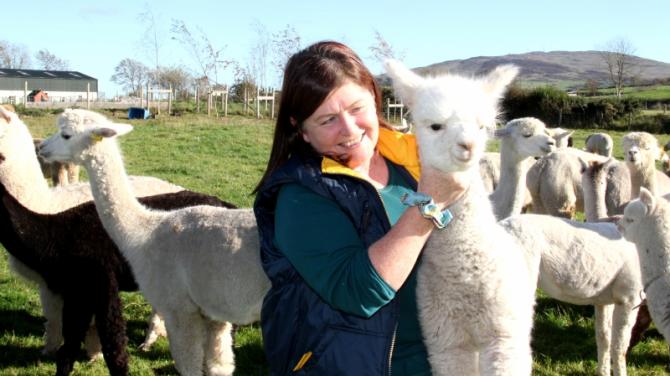 Michelle Dunniece and her husband, Stephen use their herd for ‘heat not meat’ and the wool from the alpaca fleece is dyed in colours inspired by the Mourne Mountains.

Mother-of-four Michelle is an electroacoustic composer, working with musicians with disabilities by trade and decided to keep alpacas because of their humming noise that she was incorporating into music at a time.

She said: “We got the first eight alpacas sourced from South America 11 years ago but I started learning about them 13 years ago.

“I was just so intrigued by their humming. They hum and sing a lot, especially at meal times and before bed. They talk to each other by humming, it is beautiful.

“I was finishing a PHD in London and living in Paris. I always thought my life would be city living and neither myself or my husband are farmers.

“When we settled in Dromara we thought the alpacas would be the first thing that we would get but it was actually one of the last.

“I don’t look for jewellery or anything like that at Christmas time – instead I am looking for where the next stud male is coming from.”

Michelle with the knitted alpacas sold to raise funds for the Northern Ireland's Children Hospice.

Michelle was so taken by the animals that she undertook the British Alpaca Society foundation judges training scheme and got sheep to learn about husbandry.

The Dromara woman has continued to do different training courses and her farm is one of the first in Ireland to be accredited as a training affiliate.

She said: “They have a beautiful temperament, it is a privilege to keep them. They don’t challenge fences, they do all their business in one place so they are easy to clean up after and make a fantastic pet for children.

“We have 232 of them and I know them all by name. We are a fleece farm first and foremost. We have a lot of castrated boys and they are here for fleece producers. We breed too and sell on, we also have an elite stud group from where we can produce all of the officially recognised colours in the breeding programme.

“All our alpacas are pedigree and I love their laid-back nature and curiosity. Welfare with regard to the alpaca is paramount when I go to run training courses and through our Mourne Alpacas Club we can track and trace all of our animals, they always go out in at least a pair as they have an incredibly strong herd instinct.

“I founded the NI Alpaca Group and compared to sheep and goats, they are a very straightforward animal to keep.”

The alpacas’ wool is sold to tourists and wool producers in Canada, Australia and America. The fleece comes in a variety of colours including white, jet black, rose and silver grey, appaloosa and shades of fawn and brown.  Michelle keeps the Huacaya breed mainly and has her fleeces professionally blended to produce Mourne Alpaca yarns, as well as selling raw fleece directly to spinners.

She added: “The wool is spun into yarns and sold worldwide. Our bespoke Mourne Alpaca yarn range has 12 colours in total,  three colours per season.

“We also host international yarn tours on the farm and sell the wool at source to local suppliers, they choose the fleece before it is sheared.

“It is also sold to merchants. They come here and often it ends up going out to South America which is ironically where the alpacas are from.”

Coupled with a four day marathon exhibition at Balmoral Show every year, the biggest event in Michelle's farming calendar is the annual shearing to produce the artisan yarn.

Michelle said: “The BBC had got in touch with us from being at Balmoral Show. It is a good way to mix with all our customers there and we had done different interviews.

“The BBC said at the time they would love to bring out cameras to the farm at shearing time in April, which at the time was 11 months away.

“I was really surprised to hear from them and on the first day of shearing without the cameras myself and the shearer got through 89 shearings but when the cameras were there and filming was taking place we only got through six by 4.30pm.”

She continued: “Presenter Jo Scott was very patient and was very easy to work with and the shearer was also very informative too.

“We featured for 12 minutes on the Home Ground episode. It is a process that is so different from shearing sheep, they are tied down, which looks far worse than it actually is.”

Michelle says most of the alpacas easily endure the shearing process, although some never like it each year, but it’s not traumatic in any way for them.

She says some pregnant alpacas actually fall asleep during the process.

“The filming wasn’t exactly a make-up and perfume kind of day! It was good to get coverage but I don't like watching myself back.

“It was an unusual way to spend the day but it was a good edit and the alpacas really stepped up to the mark, they were not at all shy about the cameras”.

Michelle says it is very important to her that the alpacas complement family time and she says they’re so easy to work with that it’s “practically lazy farming”.

The animals are fed between 6.30am-7am and Michelle will give the pasture a quick check too.

When the alpacas are happy they ‘cush’ which means they are settled and sit down.

“As a family we derive a great deal of pleasure from having alpacas and it came to us over time that because we don't charge visitors to the farm, or our club members for training, we ask that they give a donation to the Northern Ireland's Children Hospice, our nominated charity for our herd.

“Through our own family circumstances we have a strong connection with the charity and for this year alone we have beaten last year’s total and we are about to hand over in excess of £2,500 and we would do fundraising also on training days.

“Doing this for the hospice is a lovely way to give back and people were ringing me to say they wanted to come and see them with their children, but this is also our family home and we don't open as a business for that kind of thing.

“So I told people when they phoned that if they wanted to come along that they could but they had to give a donation to charity. We sell teddy alpacas too for £15,” she added.

Michelle says caring for the alpacas is very therapeutic.

“When I come home from work in the evenings I often just go out to them and take a cup of tea out with me then you find you are still there an hour later with them.

“It's great, because when I come back into the house my husband might have the dinner already made and homeworks done! I have to then pretend that I was needed by one of ‘the girls’ in the field.”

Outlook reporter Barbara gets to grips with a baby alpaca!