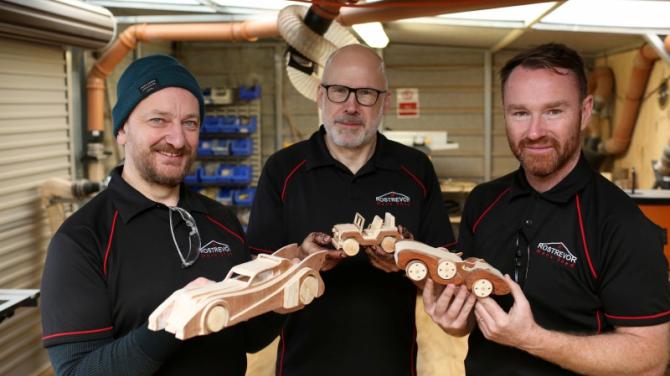 Council not agreeing to keep Rostrevor Men’s Shed in its current location would “break the spine” of the popular group, it has been claimed.

Newry, Mourne and Down District Council has been debating the future of the building leased to the Men’s Shed group. It comes after health and safety issues were identified at the premises following a fire risk review.

Back in May, the fire risk review questioned the use of the premises for community use.

Council has leased No 16 The Square to the group for the past two years on a year-to-year basis. However, in May agreed to only extend the lease on a month-to-month basis until completion of a condition survey and feasibility study.

The Men’s Shed would like a long-term lease agreement given the group’s popularity in the area, however, council is not committing to an extension until the survey and study are carried out.

Council closed off the upstairs of the building in May after it was deemed unsafe.

Over the past four months, options on the building’s future have been considered with council officers with a report coming before the council last month.

Councillors held the discussion in closed session, however, Council Chairperson Councillor Mark Murnin advised that it had been agreed on the proposal of Councillor O’Muiri, seconded by Councillor Fitzpatrick to agree option three, which was “to lease a portacabin at the current site and attempt to relocate £90,000 in the current year’s capital budget”.

The Outlook understands that this £90k is to be used to make the necessary improvements to the building and the portacabin is for the use of Rostrevor Men’s Shed while this is done.

Gethin Hughes, Michael Schwarz and Mark Gibbons with some of the woodworking projects.

Mark Gibbons from the group confirmed “there had been a lot of talk about what was going to happen” to the group and building over the past few months but added “from the very start the council has been very supportive”.

He said he had “lobbied” hard with councillors to allow the group to remain at the current site.

“The building had lay dormant for seven years before we leased it two years ago,” he said, adding that the group is overjoyed that they do not have to move, given all the hard work they have put into the premises since 2016.

“It is a huge weight off our minds and it is great news for us that we are staying here. We could not move anywhere else. It would break the spine of the Men’s Shed if we did. It would be daft for the council to throw us out,” said Mark.

The group hopes that in the future they could “maybe go for some kind of lottery funding for a large portion of money to get the building back to its former glory”.

The popularity of Rostrevor Men’s Shed has grown to such an extent that they now need to extend their space.

Rostrevor Men’s Shed is described by members as a “dedicated, friendly and welcoming meeting place where men come together to undertake a variety of mutually-agreed activities”.

It is open to all men regardless of age, background or ability and it is a place where you can share your skills and knowledge and learn new skills and develop your old skills.

A Newry, Mourne and Down District Council spokesman confirmed they are “the current proprietor of No 16 The Square, Rostrevor and the £90,000 that is allocated in the council’s capital budget is for maintenance and repair”.

Michael McKenna at work in the shed.