CAN YOU BEAT THE JACKAL? 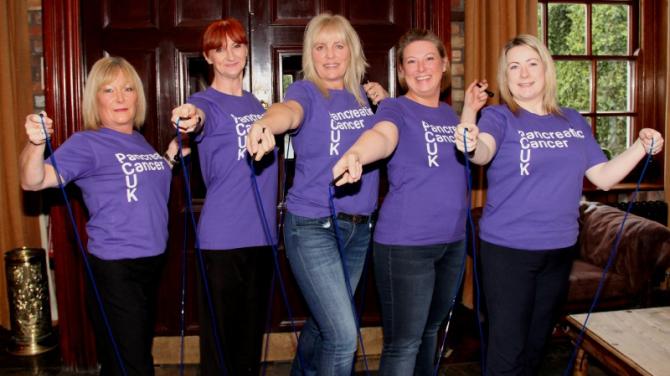 COULD you do battle with the Jackal?

The Downshire Arms Hotel in Banbridge is inviting locals to go head-to-head with the champ in the boxer’s favourite warm-up of skipping.

The Jackal better known as Carl Frampton got to know Downshire proprietors Nigel and Karen Heslip when he lived in town.

The couple are organising a Challenge 24 skipping challenge and Frampton has thrown his featherweight behind the fundraiser.

Frampton managed a dizzying 85 skips in 24 seconds and now the gloves are off.

“If you like to try and beat this, just call to the Downshire and skip for 24 seconds. You can make a donation to Pancreatic Cancer UK and the winner will receive a meal voucher,” Karen said.

Carl Frampton on his way to 85 skips in just 24 seconds.

The challenge is one of a number of events happening in the Downshire throughout November which is Pancreatic Cancer Awareness Month.

It is all in tribute to Karen’s dad, Belfast man Jimmy Black who passed away just three months after his pancreatic cancer diagnosis in 2013.

Ever since, the Heslip family have dedicated themselves to fundraising during in November. Pancreatic cancer is the toughest cancer to diagnose, treat and survive.

“Often the symptoms are confused for something else,” Karen said.

“In dad’s case, it was initially thought his health problems and the pains in his back were related to his diabetes. He went for a scan in the August which showed the tumour and pancreatic cancer. But it was too late by then. He passed away on 17 November 2013.

“What we’re trying to do is two-fold. We want to raise funds to support the work of Pancreatic Cancer UK while also getting people talking about the cancer, raising awareness of its symptoms.

“My dad was a big football fan and loved boxing so he would have definitely approved of this fundraiser!”

The family are also hosting their annual coffee morning on Saturday, 17 November which is the fifth anniversary of Mr Black’s passing.

All are welcome to call to the hotel between 10am-2pm with all proceeds to Pancreatic Cancer UK.

Proceeds from the next Downshire monthly quiz tonight (Tuesday) at 9pm will be added to the Pancreatic Cancer UK fund.

And there will be a Game of Thrones Dungeon Party and Wine Tasting evening hosted in the Downshire on Wednesday, 21 November.

There will be a medieval banquet in the cellar with food served typical of Westeros with a Game of Thrones trivia challenge and a chance to sample red wines courtesy of event sponsors United Wines.

Banbridge has close links with the global HBO hit series. Scenes were shot locally and it was recently announced that the Corbet-based Linen Mill Studios has been selected as the location for the formal studio tour for the Game of Thrones Legacy project.

And Nigel and Karen’s son Isaac has a small role in the last episode of the eighth and final series of Game of Thrones.

Tickets for the banquet are £25 available now from the hotel reception.

For more information on the Downshire fundraising or to book your Challenge 24 skipping slot, contact the hotel on 028 4066 2638. A video clip of Frampton’s skipping can be viewed on the Downshire’s Facebook page.