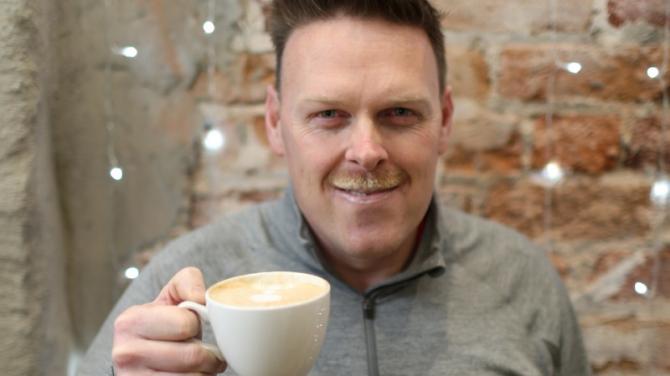 RATHFRILAND man Gareth McDowell is more familiar with a frothy coffee moustache than a real one.

However, this November, the father-of-two and cafe owner is challenging himself to grow a moustache for the annual Movember campaign.

Every year the Movember charity encourages men for 30 days to champion the moustache and raise funds for men’s health.

Some of the health issues addressed by the campaign include prostate cancer, testicular cancer, mental health and suicide prevention.

Gareth (40) who is married to Heather and has two sons, Ezra (2) and six-and-a-half month old Jude says he was inspired to take on the challenge after facing a health battle of his own.

“I was watching Good Morning Britain and I saw a feature about Movember and decided I wanted to take part.

“From watching that feature on Good Morning Britain I was listening about what taking part in Movember means and putting a focus on cancer and mental health issues.

“I had major heart surgery six years ago for an aortic heart valve replacement. I had a leaking valve as a child and that was repair surgery and I had a mechanical valve fitted,” he said.

After Gareth’s surgery he realised how easy it would be to get down about his health.

He added: “The first time I went back up to the ward the toilet was a short distance from my bed but I was encouraged by the doctors to get up and walk about.

“It was such a hard and painful walk after having the surgery and by the time I got back to my bed I was fit for nothing and could have very easily given up.

“I could see how easy it would be to get down and although the other men on the ward were getting better each day, there was an older man who wasn’t.”

Gareth noticed how down the elderly man was about his ailing health.

“You could see just how much this was affecting him and how sad he was about it. He needed a pacemaker eventually to get better.

“It would have been so easy to get down about my heart surgery if I didn’t perk myself up. You think that depression won’t and can’t happen to you, but it can happen to anyone.”

Gareth, part owner of Vera and Ernie’s coffee shop in Rathfriland, is donating all the tips this month to the Movember charity.

The local man says he is already encouraged by the support he has received from the local community.

“The fundraising is so far going well and I really would encourage other men to get involved doing something like this.

“I will keep growing the moustache until the end of November and then shave it off. I am more used to a clean look, it’s less hassle.

“And my friends keep joking and referring to me as television star Keith Lemon!” he said.

You can also donate towards Gareth’s fundraising challenge at his page - uk.movember.com/mospace/13895569