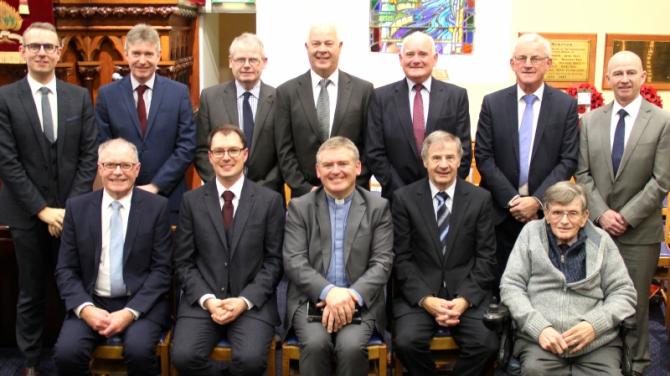 The new minister of Annalong Presbyterian Church is adapting to his new surroundings in Mourne after spending five years living in Malawi.

Speaking to The Outlook prior to his installation, Rev McCullagh told how he has spent the majority of his adult life carrying out missionary work in several countries in Africa.

“I grew up in Keady in Co Armagh where my parents owned a bakery in the town. I attended Keady Primary School, Newtownhamilton High School and then went to Armagh Tech where I studied a GNVQ in Leisure and Tourism.

“After that I went on to complete a Business Tourism and Management degree in Hertfordshire and after university went to working for Armagh City District Council,” said Rev McCullagh.

He then carried out missionary work in the Ivory Coast with the New Child Mission but that was cut short after he was evacuated from the country due to onset of civil war.

The following year he completed a PGCE in Business Education in Huddersfield before returning to the Ivory Coast the next year, when he again had to be evacuated due to the civil war.

“Growing up in Northern Ireland it was not as scary as it was for others who were with me,” he said.

It was after that he thought about becoming a minister and started studying at Union College in Belfast in 2007.

He was an assistant in Kirkpatrick Memorial Presbyterian Church in East Belfast until 2013 when an opportunity came up to go to Malawi with his wife Pamels, who he had married two years before.

“I met Pam in Malawi. I am from Keady and she is from Monaghan but we had to go to Malawi to meet!”

For the past five years they have worked with Scripture Union Malawi (SUM) with Rev McCullagh acting as ministry co-ordinator which entails regular field work, including training programmes for staff and voluntary workers.

Rev McCullagh’s teaching experience also helped as a key focus in the role was to facilitate the continuing development of ministry materials such as booklets, videos, training materials/ manuals for Bible studies, school booklets, Bible reading aids and brochures.

The couple’s two children, now aged four-and-a-half and almost two, were both born in Belfast but have only spent around eight weeks in Northern Ireland, until now.

“We had talked that we might come back to Northern Ireland next year as our eldest daughter would be starting primary one.

“The position in Annalong came up out of the blue, we did not go looking for it and were not running away from Malwai.

“So we explored it and after several months, here we are,” he said.

“We are very much looking forward to living here. We are looking forward to sharing life together because of our common bond in Jesus Christ,” said Rev McCullagh who added that he knows there will be times in life that are not easy for his congregation but he will be there to support them.