Local comic holds her own in Blame Game recording in Banbridge 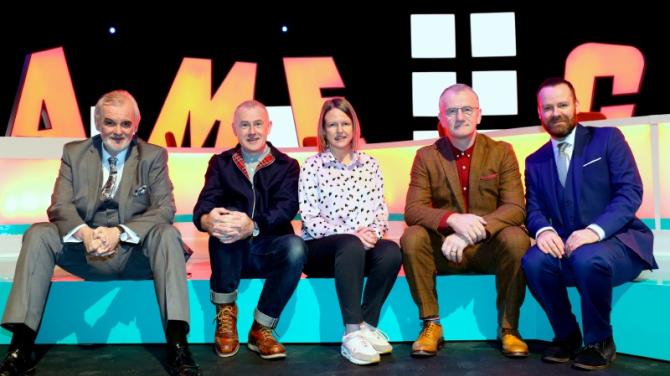 A BANBRIDGE comedian brought her “deadpan humour” home in a special recording of BBC’s The Blame Game.

The iconic show, which pokes fun at the news stories of the week in Northern Ireland, brought its studio out of Belfast, up the carriageway and to the IMC Studios in Banbridge.

Before a local audience, the panel arranged for Banbridge-born comic Elaine Malcolmson (39) to guest star.

The show went out on Friday night (23 November) with Elaine impressing with her local-based humour about everything from the town’s two Tesco to lorries falling foul of ‘The Cut’!

Seasoned comedian Elaine admits having some nerves before the TV and radio show as it was “totally outside my comfort zone”.

It was Elaine’s first appearance on The Blame Game after cutting her teeth on current affairs Radio Scotland show Breaking The News.

Joining the established panel was “intimidating” but Elaine held her own.

“Thankfully there was quite a bit of prep behind the scenes. The day before we were given a brief on the stories they want to talk about so I was able to read up on news stories. But that really wears you down, the topical news at the minute is really depressing.”

Elaine had some pals in the audience and although it was good to see some friendly faces, “it is easier to do a show in front of strangers”.

Being on the IMC stage was a surreal experience: “When I was a child the building was the swimming pool and the cinema was straight in front of where we were living.

“Banbridge really is so fortunate to have a theatre space like that in town.”

The TV show went out on Friday night with the radio version on Saturday.

“It’s never good seeing yourself back but I will listen in. I can use it as an education, seeing what made the final cut.

“It was great being on the show and I hope it comes back to Banbridge soon.”

Elaine, a daughter of Norah, still has family living in Banbridge including her sister and two nephews.

Born in Newry, Elaine grew up in Banbridge behind the old Iveagh Cinema off Downshire Road.

A pupil of Ballydown Primary and Banbridge Academy, she moved to Glasgow aged 18 for university to study physiology. She loved the city and its “small village” atmosphere so much that she eventually made her home in Partick in the city.

After a brief move to Cardiff for Masters study, she worked for a time at the University of Strathclyde in a recruitment role. Then it was back to Glasgow for Phd studies in Science and Communication.

Elaine’s route to comedy from academia was forged during her time at the University of Strathclyde.

“The university would really encourage students to get involved in their night classes. There was one in stand-up comedy on Tuesday nights with a class gig at the end. I thought it sounded interesting and I would give it a go with no intention of ever getting up at the gig. But when the time came, I thought I would never get the opportunity again so I did it and didn’t stop!”

Now Elaine writes her comedy in the morning and works in the library of Glasgow University in the afternoons.

Much of her time is spent writing radio scripts and sketches with preparation under way for her solo show at Glasgow International Comedy Festival in March.

The ‘mockumentary’ is set in a version of Northern Ireland where Brexit has meant a soft border.

“This show came out of the utter ridiculous situation we find ourselves in. I have a role in the show and it’s great fun,” Elaine said.

“The majority of the crew are female with Marie McDonald as the producer. That’s quite unusual in comedy and the filming has been a laugh.”

As a comedian, Elaine does feel the pressure to entertain but says it’s more common for others to suggest material.

“People would say ‘here, I’ve something you can use’ in your show or another thing I’ve heard about 20 times is, ‘my mate down the pub is so funny’. I’d just say have a go.”

Elaine would describe her comedy as “observational, but looking at the bleaker side of life”.

“I’ve been described as downbeat and quite deadpan in my humour which is fair enough. It’s totally Northern Irish, that self-deprecating way of looking at things.”