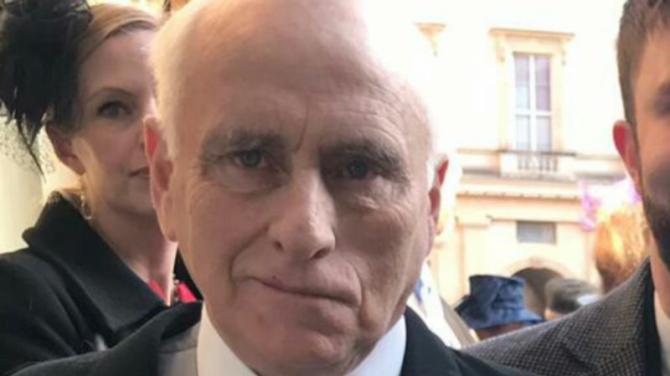 RATHFRILAND farmer and Co-Op manager Jim McCrum has been awarded with an MBE at Buckingham Palace.

Jim has been at the helm of Rathfriland Co-Op since it was set up in 1987 and has dedicated his life to its success.

He was awarded an MBE for services to the Rathfriland Farmers’ Co-op Society and the farming community back in June in the Queen’s Birthday Honours.

The Rathfriland man flew to London last Tuesday (20 November) with his daughter Claire and met up with his other two children for the ceremony.

He said: “We then joined up with my other daughter Heather who lives in London and then met up with my son William who works in Glasgow.

“We stayed in the Hilton Hotel which is convenient to the palace and went to Buckingham Palace on Wednesday (21 November) for the ceremony in the Ballroom.

“The ceremony started at 11am but for an hour before that all the recipients mingled together in the Great Hall.

“We were not allowed phones or iPads inside here so it meant that we could really chat to one another and had really good craic between ourselves and I spoke to people from all over.”

A livestock farmer from the Lisnacroppin area, Jim says overall “it was a terrific day”.

He added: “Prince Charles presented me with the MBE. He was so lovely and down-to-earth and chatted away with me and I can only compare it to chatting to your next door neighbour.

“He asked me if I was still farming and asked me about my family and if any of my family were going to take the farming on.”

Jim also enjoyed spending time with his children being a tourist in London following the prestigious ceremony.

“It was my first time in London and we stayed until the Thursday night and made a real break of it.

“We went to Hyde Park and the underground and Shepherd’s Bush and walked around the streets of London. It was a lovely break.

“However, it was awful hustle and bustle in London and just a different way of life. It never stops. And I wouldn't change it for Rathfriland anyway.”

Although receiving the MBE won’t make any difference to Jim, he says “it’s a lovely honour.”

“It won’t change me, that's for sure. I have been a farmer for my whole life and I love it.

“Receiving the MBE has been not just a lovely honour for me, but an honour too for the farming community,” he said.

Meanwhile, Ireland and Ulster captain Rory Best from Poyntzpass has spoken of his ‘immense pride’ after being awarded an OBE at Buckingham Palace.

The British and Irish Lions hooker is Ireland’s most-capped forward with 113 appearances and led the team to the 2018 Six Nations Grand Slam.

The veteran hooker was joined at the palace by his parents, who have both been decorated with MBEs, as he received his honour from the Prince of Wales.