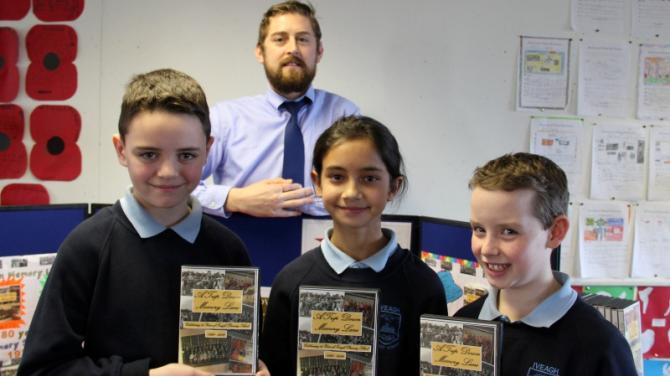 Pupils from Mr Nugent’s class have been working hard in November to produce the DVD entitled ‘Celebrating 80 years of Iveagh Primary School – A Trip Down Memory Lane’.

This year’s business team is called ‘Iveagh Incorporated’ and the DVD will be sold for £5 with all proceeds going to the Southern Area Hospice.

Different groups were put together for the business run in association with Young Enterprise NI.

And these groups consisted of a graphic design team, finance, production and three managers.

Evan, one of the managers, described their work process: “We started making the DVD in the middle of October so it was a fast turnaround for it to be ready.

“All the students interviewed people for the DVD and we helped to organise everyone.”

Lewis, who was also a manager, added: “We enjoyed doing it and worked together as a team really well too. We learned lots of different skills and techniques for the project.”

Meanwhile, manager Quddoosiyyah added: “Mr Nugent did all the editing and we put together the front cover ourselves and organised those in the teams. We also got a £50 loan from the school for the project.

“We had to write letters to past pupils and parents to be interviewed for the DVD.”

Primary Seven teacher, Mr Nugent, who was leading the innovative project, said: “This is the largest business that we have ever had. We did a lot of work in school for this project and a lot of extra hours were put in too.

“It is an hour-long DVD and I did all the editing. We are expecting it to sell really well.”

Mr Nugent continued: “In school we also handed out flyers promoting the DVD that were designed by pupils in class.

“We have all the principals who have ever been at Iveagh featured in the DVD and although two are now deceased we were able to get written memories of their time here from their family members.

“All of the proceeds from the DVD will go towards the Southern Area Hospice and we have got around 200 copies for sale. I’d really encourage people to get a copy as it is such a lovely celebration of the school’s 80th anniversary.”

The DVDs will be launched next Monday (10 December) in the school assembly hall with a screening of a trailer of the DVD.

Pupils involved will also be handing out punch, crackers and cheese to invited guests and parents and will be dressed in their old style clothes reflecting the 1930s.

Then from 17-20 December the DVDs will be available from the foyer of the school.

The DVD has photographs and old newspaper articles, as well as readings from past pupils and former principals recalling their time at the school.