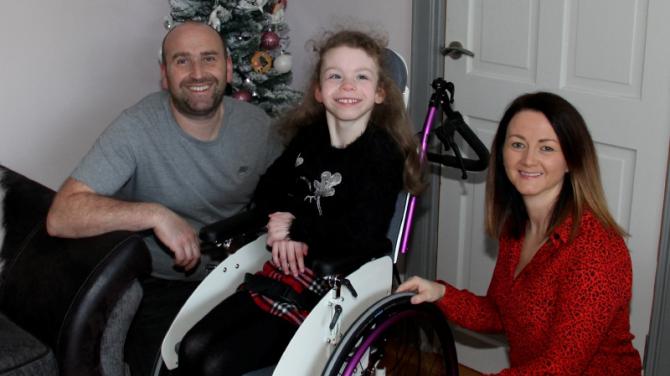 CHRISTMAS came early this year for one special little girl from Annalong.

Thanks to the generosity of the Mourne and Clough community, enough money was raised to help purchase a specialised wheelchair for 10-year-old Ellen Herron.

Ellen, the only child of Pamela and Darren, has a genetic condition called Williams Syndrome.

The syndrome is characterised by medical problems - Ellen is non-verbal, has a heart condition and global developmental delay.

Ellen was born four weeks early with a heart condition and wasn’t meeting her milestones. She struggled to put on weight and at six months old weighed just over 7lbs.

The hospital sent her for a blood test and she was diagnosed with Williams Syndrome when she was nine months old.

She underwent heart surgery at two years old and has since developed into a fun-loving little girl who attends Rathore School in Newry and is a member of Annalong Girls’ Brigade.

Ellen’s mum Pamela said: “She is the happiest wee girl and everyone who meets her says that about her too.

“Ellen loves music, that is her big thing. When she is out and about she will always have a phone with YouTube playing - mostly Derek Ryan and Ed Sheeran!”

Pamela says it was at a disability exhibition in the summer when she first spotted Ellen’s new wheelchair.

“She was so comfortable when she tried it out. She had a standard NHS wheelchair which is just not as comfy for her.

“We got home and thought about it for a while and then made an appointment with 3R Mobility - the company who supplied the chair.  They told us the chair would cost £5,340. We couldn’t believe how much it would be!”

Pamela, the school secretary in Cumran Primary School in Clough, told her principal Mrs Moles just how much the chair would be.

“Mrs Moles asked if the school could help by doing a sponsored walk to raise funds, and it just spiralled from there,” she added.

Pamela says she was inundated with offers from people asking if they could help raise money for the chair.

She said: “People just wanted to help. There were so many different events organised. “Amongst the events were a table quiz in the Royal British Legion, a stew morning in Annalong Community Centre, a fireside quiz, a table top sale and a raffle in Holmes Poundworld.

The children’s heart charity, Heartbeat NI offered to give Pamela and Darren the money for the chair upfront before all the fundraising was finished.

“We just had to give the money back to them when fundraising was finished but it meant we were able to get the chair sooner.

“Irwyn and Carol from Heartbeat NI have been so good to Ellen since meeting her back in 2010 when she had her heart surgery.  I think Ellen has stolen their hearts a bit! And the hearts of the boys in Annalong Football Club too!

“Any extra money that we have raised from the chair is going to be used to install a sensory room at home for Ellen.

“We are currently researching the best equipment for this. It is also very expensive and we never thought we would be able to get this for her -it’s just amazing.

“Ellen loves bubble tubes, lights and switches and the sensory corner in her classroom is her favourite place,” Pamela added.

“Ellen doesn’t use her wheelchair at home but she does need it when we are out and about.

“She loves getting out for walks along the shore and in Newcastle so hopefully the weather will pick up soon and we will get her out for a good walk in her new chair.

“Darren and I would like to thank each and every person who gave money to Ellen and especially those who organised and helped out at the various fundraisers.

“It really does show just how generous and amazing our local community is and how much they think of wee Ellen.

“I think what really shocked us is that we never asked anyone to give to this - people just wanted to help. And people who we didn’t even know!

“There are too many people to name them all but we want you all to know that we will never forget what you have done for us.”