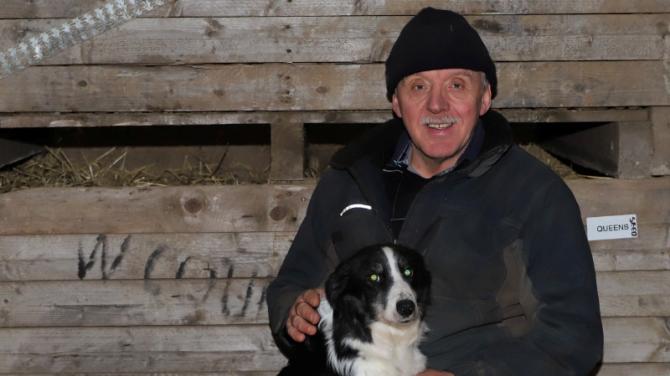 A “MIRACLE dog” survived for weeks without food or water after it became trapped in a hay shed.

Jill, a young border collie, went missing one Sunday in November after she got herself stuck behind hay bales and potato boxes.

Her owner, local man Oral Graham, had almost given up hope of finding his beloved pet again until he moved the boxes for potato picking and Jill was behind the last one.

Oral, who lives between Hilltown and Rathfriland, said he can’t believe Jill was “so close, yet so far” the whole time she was lost, as she didn’t make a sound.

He said: “We looked everywhere for Jill and called and called for her and I just didn’t know what had happened.

“I thought she had been taken and my biggest fear was that she had got into a farmer’s field and had been worrying sheep and was then shot.”

Oral still doesn’t understand how Jill managed to get herself trapped in the shed.

“I have another brown collie called Amber and she was around the boxes howling and tearing at them, so she was obviously trying to get at her unknowingly to me.

“I was picking the spuds and taking the boxes away to put in the hopper and when I picked the last box she came out and was as thin as rake,” he said.

After discovering Jill alive and well, Oral sought the advice of a vet who said it was “a miracle” she survived.

“When Jill saw me she just ran over to me and put her two paws around my leg and she always would have given me her paw before.

“She was very glad to see me. The vet said it was nearly impossible to believe that she had survived for so long.

“I would have been out in the shed every day and she didn’t make any noise.

“We are all just so delighted to have her back. She is part of the family. It’s so strange, because she would never have really gone very far from my side,” Oral said.

The local man, who is delighted to have his family pet home, says Jill is getting used to freedom again.

“I just can’t believe she survived for so long without eating or drinking at all and she must have been eating mice or stones to stay alive.

“Strangely, when you see me, Jill is never very far behind, so I don’t know what happened to her that day she went missing.

“Since she has been found she had a good bath and is slowly getting back to eating and drinking again, it’s great to see!”