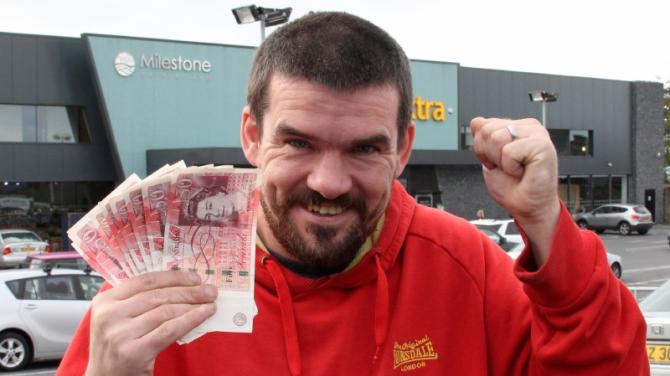 A LUCKY Rathfriland man who scooped £50,000 on a scratchcard says his jackpot win will change his family's life.

The father-of-two, who works in The Milestone’s food preparation department, says he bought the National Lottery scratchcard on a whim.

He added: “My daughter wanted me to get her something out of the shop. I was just paying for her thing at the till when I picked up a scratchcard. I would really only buy one every now and again.

“I suppose I wouldn’t have been at the shop otherwise so it is probably thanks to her that I won!”

Gavin came out of the shop and began scratching the card between the shop door and car park.

“I was scratching it and looked down then realised there was £50,000. I was so shocked. I took it over to my mate in the petrol garage and he was all bizz too. We both couldn’t believe it!

“When I got home I had to phone the National Lottery and they confirmed it and told me how to go about claiming the money,” Gavin added.

The devoted dad says although he hasn’t fully decided what to do with the money, he is looking forward to spoiling his two daughters, Hollie (5) and Aoife (4).

Gavin continued: “We have talked about maybe booking a holiday soon. We might go back to Lanzarote or I might price Lapland for December. We also hope to do bits and pieces to the house too.

“However, we are just making plans and will see what we will do. At the minute, the money is taking no harm in the bank. I just can’t get my head around it.

“Although the girls don’t understand just how much it is, it will certainly make a big difference to our lives. It will definitely change our life for the better.

“We will be able to do things that we couldn’t have done if we didn’t have the money.”

He joked: “I also bought a £2 one on Thursday night (27 September) and there was £40 on it. The girl who served me joked with me that I needed to get out of the shop!

“I would really only buy a scratchcard now and again so it was funny to win something twice in one week.”

The Rathfriland man says he is getting recognised after his windfall.

“Since winning the money I have been going up to town and people have been stopping me, asking if it was me who won and joking if I had something to tell them!

“It was really nice to win it at The Milestone. I have been working there for around a year and love it.

“Tom McAvoy, the owner, was delighted for me when he found out what I had won. He took me out to Hilltown to the Post Office to cash in the scratchcard to make sure all was okay.”

Meanwhile, Tom said: “We are all delighted that Gavin has had this big win and everyone at The Milestone would like to congratulate him too.”