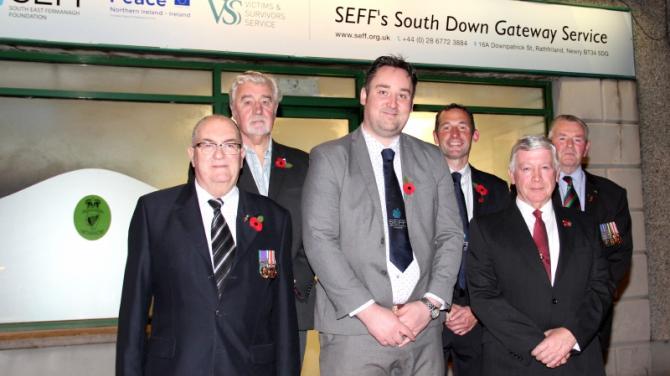 A NEW support service for victims and survivors of terrorism has been launched in Rathfriland.

The new initiative is the work of Lisnaskea-based South East Fermanagh Foundation (SEFF) who have worked in partnership with local people in recent months in an effort to see continuance of services post the dissolution of South Down Action for Healing Wounds.

On Wednesday (7 November) an annual Act of Remembrance took place where local people alongside visitors met to remember the dead of two world wars as well as those killed in wars and conflict since.

Those murdered as a consequence of the terrorist campaign (in the Northern Ireland context) were also given prominent remembrance with poppy crosses laid in acknowledgment of their sacrifices.

The service was officiated by Rev Alan Irwin (of Colaghty, Lack Church of Ireland, Co Fermanagh)

It was followed by the formal launch of SEFF’s South Down Gateway Service. Speaking of the launch, director of services Kenny Donaldson stated: “We were very encouraged by the large turnout for the launch. A very moving and fitting Act of Remembrance focusing on the legacy of terrorism in the context of the Northern Ireland Troubles but which also reflected upon the sacrifices of those killed in the Great War - 100 years on since the ending of that War, there then followed the formal launch of the new victim/ survivor support initiative.

“SEFF’s chairman Eric Brown, myself as director of services and Pete Murtagh, advocacy support worker for the area, gave addresses concerning the new service where we pointed to the need for partnership between our group and the local community of South Down and Lagan Valley in best delivering for victims/ survivors. The chairman and vice-chairman of the sub-committee, Fran Gilmore and Joe Ferguson also leant their support and commitment to the new initiative.

“Among those attending were local elected representatives, local clergy and many innocent victims/survivors of terrorism from the local area and further afield.”

On Remembrance Sunday, a poppy wreath was laid at the cenotaph on Rathfriland by a representative from SEFF’s South Down Gateway Service.

The new Gateway Service is now open and victims/survivors from throughout the South Down and Lagan Valley are encouraged to engage.

They can do so via calling: 028 6772 3884 where Rathfriland-based staff will be available to provide assistance or alternatively people are encouraged to call into the offices located at 16a Downpatrick Street, Rathfriland.