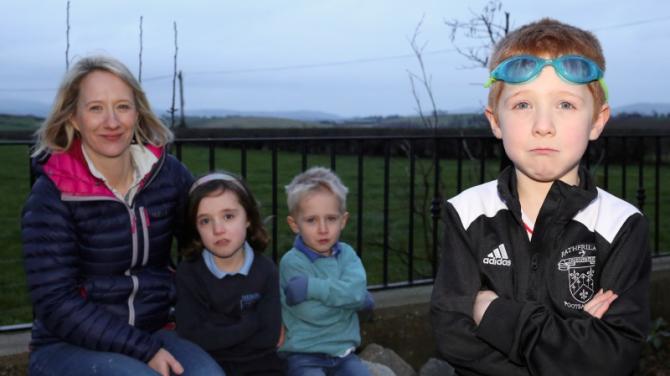 LOCAL children have been left without swimming lessons after council pulled the plug on a private pool.

Swim school owner, Des Cossum sent a text message to local parents last week informing them they had to stop lessons from this Saturday (19 January).

He said the lessons which had been running for five years had to stop due to the pool’s “disappointing closure” over planning issues with council.

Mr Cossum, who runs swimming lessons from six different venues across Northern Ireland, said: “Over five years we have conducted thousands of lessons from that one venue.

“It was very popular, we taught children from a lot of the local schools, and adults on occasion too.”

Owner of the private pool, Craig Baxter told The Outlook he can “fully understand” the frustration of parents that the pool has closed.

He says he had not considered “the necessity” of applying for planning permission to offer commercial lessons at the pool but had made environmental health aware of the lessons with routine water testing.

Meanwhile, Ballyroney mum of three, Aileen Lawson whose son Rory (7) attended the swim school for two years was disappointed. The text message informing her of the closure “was completely out of the blue” as she wasn’t aware of any issues with the privately-owned pool.

Mr Baxter received a letter from council in January 2018 asking him to close the pool.

He said he took advice and submitted a full planning application, which was refused in July of last year.

Planning officers from Newry, Mourne and Down District Council said the application was refused because there are “no overriding reasons” why the development is essential in the rural location.

Planners concluded that it did not meet any expectations for economic development in the countryside and there were no exceptional circumstances.

Mr Baxter then launched an appeal through a planning consultant which was to be heard this month.

However, after further consultation with his planning consultant and information received from Newry, Mourne and Down District Council he was told this appeal would be unsuccessful.

“We just felt we could not take this any further as the cost of doing so would be prohibitive. So on Monday (7 January) we decided we had no option but to stop the lessons.

“It is very disappointing that four people now have lost their jobs and 230 children, and some adults as well will now have to look for alternative facilities to continue to learn to swim,” he said.

The Lawsons are one of the families affected. Aileen - mum to Rory (7), Faye (5) and Ross (3) - said she has now been left, along with “many other parents” from the South Down area to find an alternative swimming class for her son.

“I would say there are around 40 kids who attend on a Saturday and there are also adult classes.”

Aileen says the set-up with the swim school worked for her family because of its flexibility.

“It was so good because I work four days a week and it meant that we were often able to pick what session suited us for Rory. I had already considered sending my daughter there too.

“I feel now that once Rory stops the swimming lessons that he will get out of the swing of things and lose some of the techniques that he has worked so hard on,” she said.

Aileen feels “disappointed” by the council’s decision not to grant planning permission for the commercial lessons.

“I just don’t understand it. We are now left trying to find an alternative swimming class for Rory which is difficult when you are working and also because a lot of classes, including those that are council-run, are oversubscribed and difficult to get on to.

“There will be a number of local parents in the same boat trying to find somewhere to send their children to – so that will be a real scramble.”

Newry, Mourne and Down District Council confirmed planning did receive an application from Mr Baxter with the proposal to change the use from private swimming pool to commercial swimming pool and to retain the extension that was built.

The Baxter's pool on the Ringbane Road which was used by Cossum Swim School for five years.

However, planning officers said the swimming pool block was 50 per cent larger than that approved and had been extended without planning permission and was being used as a swimming school business.

In the assessment and consideration of the application by council the main issues considered were the principle of the business use in the countryside, design and integration of the extension, road safety and impacts on amenity.

Council said that a business of this nature did not qualify to run in a rural setting under various policies according to the planners.

Planners said the overall design of the swimming pool block is “poor” and would not normally be acceptable in the rural area.

A spokesperson from Newry, Mourne and Down District Council said: “The development in question was constructed and operated without planning permission.

“A planning application seeking retrospective permission was refused. Subsequently there was an appeal to the Planning Appeals Commission.

“That appeal has now been withdrawn by the applicant/ agent for the original application. This is a planning enforcement issue and it would not be appropriate for Newry, Mourne and Down District Council to make any further comment at this stage.”