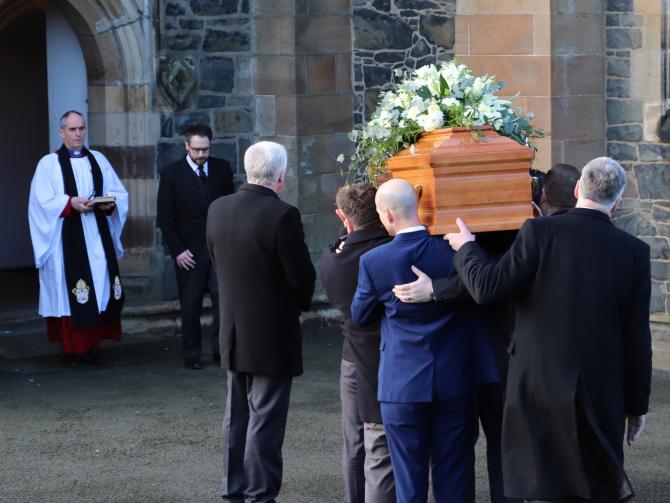 The retired police superintendent and seasoned mountain walker died after slipping on damp ground near the top of Slieve Commedagh on Sunday afternoon.

Friends, family and former colleagues gathered to remember the family man described by colleagues as the “best boss they ever worked for”.

In the funeral address, Ven. Roderic West, Archdeacon of Dromore and Rector of Seapatrick Parish, passed on the family's thanks for all the support shown in recent days.

“The family have asked to say how humbled they are by the number of friends who have called or contacted them. Many people have been impacted by his death, because as someone said, ‘If he touched your life, you remembered him.’

“We remember Robert today and thank God for his life, a life that was cut short by a tragic accident, when he slipped on damp ground near the top of Slieve Commedagh just before 1pm on Sunday.”

Father of two Mr Robinson (pictured above), who received the Queen's Police Medal for his service, was one of two men to die following separate falls in the Mournes.

Seán Byrne, a father-of-four from Camlough, who died on Wee Binnian was also to be laid to rest today (Wednesday).

Mr Robinson's passing is being mourned by his wife of 42 years Barbara, his son and daughter, Neil and Laura, daughter-in-law and son-in-law, Hazel and Simon, his grandchildren, Logan, Zac and Lucy, his sister and brothers.

Ven. West prayed that his relatives will “continue to know God’s comfort and strength, today and in the coming days”.

Mourners heard that Mr Robinson was born in Claudy, Co Londonderry. The fourth child in a family of six.

The family moved to Craigavon, when he was in his early teens. When he left school, he worked for a short time in a local shop, before joining the RUC in 1972. After his initial training he served in Tynan, and in the years that followed, he served in Newtownhamilton, Middletown, Enniskillen, Lurgan, Armagh, Omagh, Musgrave Street Belfast and finally in Downpatrick as Chief Superintendent and District Commander. He was awarded the Queen’s Police Medal, in the Queen’s Birthday Honours List in 2006, for his service.

After marrying his beloved Barbara McMullen in 1976 in Christ Church, Lisburn their first home was in Armagh. They moved to Waringstown in 1984 and then to Banbridge in 1998.

Mr Robinson “always had an interest in sport” according to Ven West. He was an active follower of Banbridge and Ulster Rugby Clubs, attending matches regularly with a group of friends.

He played golf and was a member of the Banbridge PIGS golfing fraternity. PIGS as in pensioners, invalids, geriatrics and scroungers. He enjoyed fly fishing, especially salmon fishing.

“He was a keen cyclist, he did the Lap of the Lough, cycling around Lough Neagh in 2017 and was planning to do it again this year.

“However, his passion was walking, he was a very experienced hill walker, walking regularly every week. He has walked on mountains all over the world, including Mount Sinai and Table Mountain in South Africa, he walked in Vietnam, Cambodia, Borneo, Morocco and other places.

“He did the Seven Peaks challenge, every year for the past six or seven years. He also participated in a number of walking groups. He was always willing to share his passion by introducing others to the joy of hill walking.

“He took part in fundraising for the hospice doing treks and organising events.”

His family were at the centre of Mr Robinson's life and he delighted in their achievements.

“Robert and encouraged and supported Neil and Laura throughout their lives. He supported Laura in her show jumping activities and competitions, taking her to shows. There was rarely a day when he wasn’t there. Neil and Robert enjoyed cycling and walking together.

“He enjoyed helping to look after the grandchildren, Logan. Zac and Lucy, taking them to school and looking after them in the afternoons and during the school holidays. Logan and Zac accompanied Robert on some on his walks, including Slieve Donard, on his 60th birthday, when Logan was three. Robert had a real sense of pride as a result of that achievement.”

Robbie's wife Barbara, his son and daughter, Neil and Laura, daughter-in-law and son-in-law, Hazel and Simon make their way into Holy Trinity Church.

His care extended to supporting his mother in her latter years, at home and then in the Nursing Home.

“He was a devoted husband, and a great support to Barbara throughout their marriage, as she was to him.”

Assisting at the service were Rev Catherine Simpson, Rev Andrew Irwin (curate assistants) and Rev Rory Corbett (non-stipendiary minister). The hymns 'The Lord’s my Shepherd' and 'O Love that will not let me go' were sung. The readings were from Psalm 46; Romans 8:31-39 and John 14:1-6 25-27.

Community and church life was important to Mr Robinson who was able to dedicate more time upon his retirement.

“Robert served as a Church Warden and vestry member of the parish. He was the chairman of the Fete Committee for nine years, a role he fulfilled with commitment and dedication. He had the ability to lead and be part of the team, the ability to encourage people to help and be involved. He had called into the Parish Office last week to put information about this year’s Fete in the Parish Magazine.

“He assisted in other ways as well, including preparing the church for Christmas services, helping to put up one of the Christmas trees, and putting out the stands for the candles.

“Robert enjoyed helping, supporting and encouraging others, being there for others. He was thoughtful, caring and considerate. He could be direct, if he needed to be. He was witty, and of course, there was that smile.”

In the aftermath of Mr Robinson's fatal fall, the voluntary Mourne Mountain Rescue Team came to the scene.

Their help and support has been described by the family as “fantastic” and they have requested that any donations in lieu of flowers should be made to the team.

“The family have asked me to express their appreciation and thanks to the Mountain Rescue Team and Police Rescue Team. In the words of Neil, ‘From start to finish they were fantastic’, and he couldn’t praise them enough for what they did,” Ven. West said.