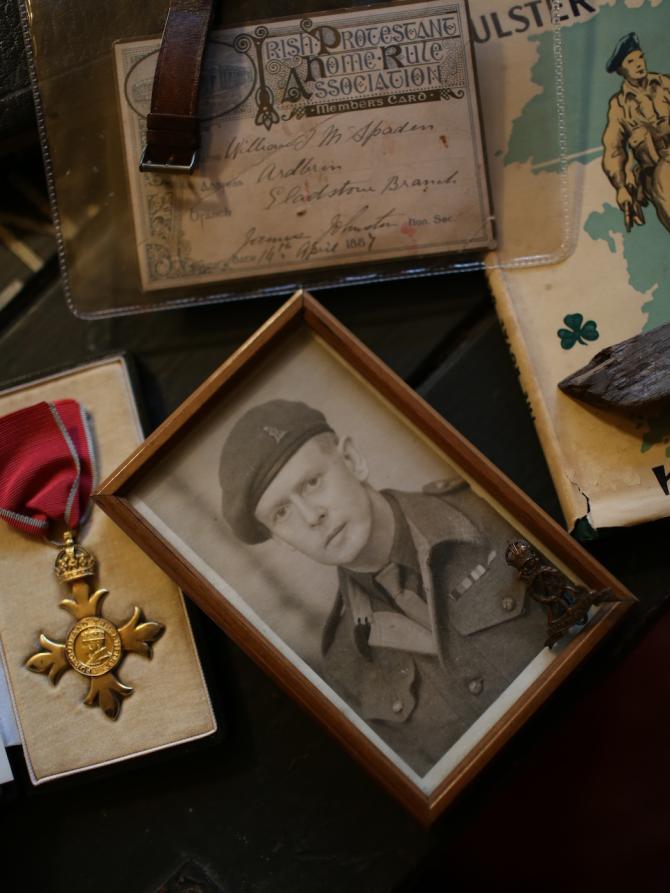 “SOME things are just meant to be,” said Clifford McSpadden, who happened upon some valuable family heirlooms being sold at the auction last week.

Banbridge man, Clifford went online to look at Scarva Auctions after his wife remarked he hadn’t done so for a few weeks.

“The first thing I saw was someone selling an OBE medal and I was a bit taken aback by that. It is not something that you see coming up for sale,” he said.

Clifford McSpadden with the precious family artefacts discovered by chance at Scarva Auctions.

Indeed, the medal was one of several lots that evening which caught the grandfather’s attention.

“There were war medals as well, these and some documents really caught my eye when I noticed they had the McSpadden family name on them.

“I decided to bid on them and I was fortunate enough to get the items with our name on them.”

Clifford, who grew up on the Knock hill outside Rathfriland, has spent some time tracing his family tree and said it was not just the items themselves which attracted his attention, but the history they told.

“There was so much more than the medals, the paperwork itself interests me more.

“There are letters from back in 1880 when William McSpadden was seeking ways to protect the community from the troubles which were happening back then. Then George came back from World War One and he was trying to get people organised for the civil war they thought was coming in 1920.

“His son, George went to the Second World War and fought in Europe and in 1960 he was awarded the OBE. All of that history is there in wonderful letters.

A full collection of the medals awarded to George McSpadden (pictured below).

Clifford said it was wonderful to have discovered this background of his family members.

“As a grandfather, it’s all about telling these stories and finding out more about our family history and passing it on.

“It’s such a small family. There are only a dozen or so McSpaddens left in Northern Ireland now.

“We know they came over from Scotland in the 1800s and we know they settled in Annaclone, Rathfriland and the Knock hill.

“It’s a very rare thing to find documents of historical importance locally and then to have the family name on them too.

“The whole family here thinks it’s wonderful to locate that bit of history before it disappears.”

Despite his work on the family history, Clifford and other family members had not known there were any medals.

“We were not aware of any of the medals, which makes it all the more interesting.

“To see how these things are stored in homes and boxes and nobody knows that it is a valuable piece of a jigsaw in a family story.

“If anyone has any pieces of the story that could help us with the McSpadden history, we would love to hear from them.”

During his search of the McSpadden family history, Clifford discovered some other interesting pieces of information.

“William McSpadden was on a muster roll in the mid-1600s in Bangor and it was wonderful to have the original notebook in my hand with his handwriting, it was quite special.

“To see how the families survived through the famine and how they were only allowed to lease and not own property, all this kind of brought the history books to life for us all.”

He also had praise for Scarva Auctions and the work they do.

“Keith and Ian at Scarva Auctions, they have a great asset for us here, they are one of the best auction houses I have seen,” he said.

Keith Baird, who owns Scarva Auctions along with Ian Donald, said that while they have had war medals brought to them over the years, they have never had an OBE medal before.

“The items were brought to us from a house clearance in Newcastle, we ended up with 35 lots from that one collection,” he said.

“When we saw the local interest we were excited to see it here, we knew it would create a stir.

“The OBE medal is from 1960 and is in its original presentation case. All the medals were in perfect condition.”

Auctions are held every Monday night at 6pm and you can visit the auction house or bid online. They host viewings of the lots each Friday.

“There have been lots of interesting bits and pieces over the years. Jewellery, paintings and furniture have all attracted a lot of attention,” he said.