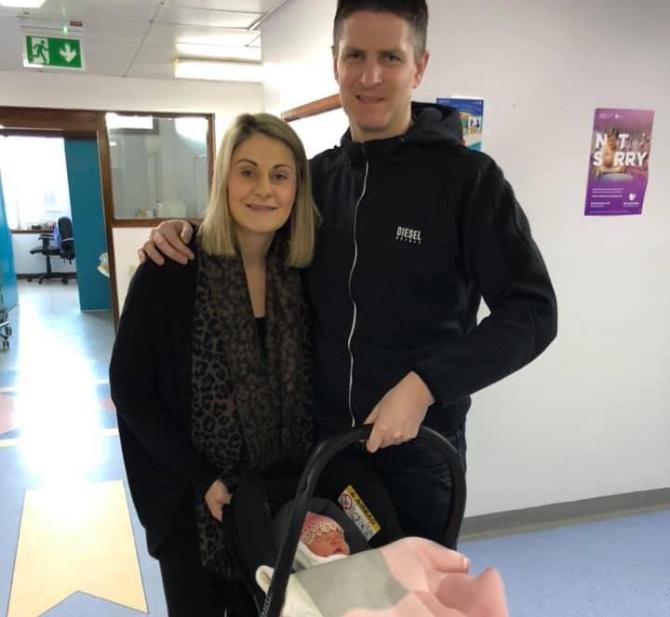 Players at Valley Rangers Football Club have given a whole new meaning to the word ‘dribbling’ after what appears to be a baby boom in the club in the past few months.

Three of the Mourne team’s senior players have welcomed new additions to their families in the past 10 days.

Reserve team player, Jason McCulla was the first to kick off the 2018/19 baby boom season when his wife Laura give birth to baby Jenson back in October.

Club stalwart, player and secretary Craig McKee and wife Rachel welcomed baby Lily at the end of February, which was closely followed by the birth of Gareth and Cathy King’s daughter Myla.

Club stalwart, player and secretary Craig and Rachel McKee with baby Lily, who was named after Craig’s grandmother.

Then last week star player, Andy Graham and his wife Kathryn welcomed their first daughter into the world.

Andy and Kathryn Graham are all smiles on the arrival of their first daughter.

Club secretary and one of the new fathers, Craig McKee told The Outlook that the new arrivals just adds to what the club is all about.

“This is a family club through and through and all the new arrivals add to the family environment we have created. We want to retain that over the next few decades of the club.

“I have been a club member for 20 odd years. I joined when I was 14 years old and am now 37 and still involved with it.”

With three of the four babies already born being girls, Craig added that it is great that the Bignian Park-based team already have a girls’ football team.

“We have girls’ football training on a Friday evening for two age groups and the girls had their first match against Ambassadors a couple of weeks ago.

“It is nice to know that our girls will have a chance to get on the field as well as they grow up as we already have that facility in the club.”

Although it appears that at least one of the newborns already has football in his blood!

“Jenson showed his colours by holding off his arrival allowing Jason to play and score his fifth goal of the season.”

The club will be hoping that these sleepless nights and added responsibility do not affect the players’ performance on the pitch!