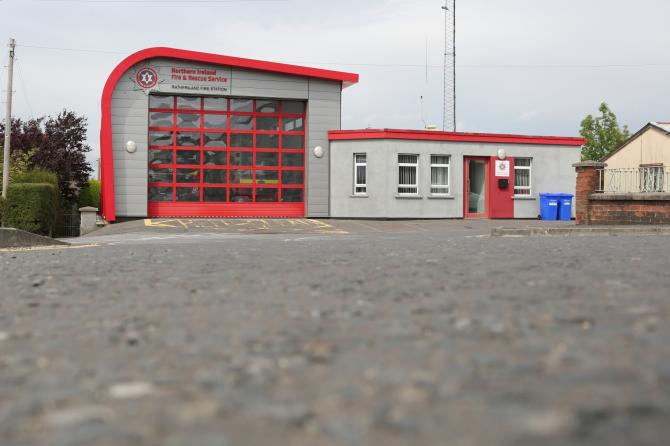 Around a third of emergency fire calls were attended by both of Rathfriland’s fire appliances.
The confirmation comes amid a review into the future of the station’s second appliance which could be withdrawn.
The Outlook obtained detailed information which shows that the second appliance at the station is being used regularly.
The figures also reveal how many times the retained crew from Rathfriland Station has been ‘mobilised’ in the past three years.
Busier than ever, crew have been out twice as many times from 2016. Appliances from the Castle Street station were mobilised 251 times last year compared to 180 times in 2017 and 130 times in 2016.
It comes as the Northern Ireland Fire and Rescue Service (NIFRS) is currently reviewing how fire and rescue cover is provided through its retained (part-time) stations. As part of that wider process, the service is conducting a review into the second fire appliance and specialist fire appliances at several stations including Rathfriland.
The review has been ongoing from July 2018 and has not been completed, according to a NIFRS spokesperson.
It is not the first time that the station has been under threat of losing an appliance. A proposal was suggested back in 2006 to cut the appliances from two to one but failed to transpire.
Under a Freedom of Information request, The Outlook can reveal 43 of the 150 calls attended by Rathfriland fire crews last year were attended to by both appliances.
This follows on from 37 out of the 135 calls in 2017 and 28 of the 93 calls in 2016.
These figures mean that around 30 per cent of emergency calls were attended by both fire appliances. These included a major fire on the Ballyroney Road outside of Rathfriland, a major fire along the Yellow Road in Hilltown and a ‘special service call’ to the Bryansford Road in Hilltown.
In all these instances last year, both fire appliances were at the scene in less than 10,15 and 20 minutes respectively.
Given Rathfriland’s geography, there are fears that if the station fails to retain its two appliances, the area would not be covered safely and quickly in the event of multiple emergencies and response times to incidents could be compromised, even if a second appliance was provided from another station.
Speaking at the time the review was announced, a senior figure from Rathfriland station said he had been told that the station is being reviewed because “they don’t get enough calls”.
His fear were that if the town was left with one appliance and it was out on a call, it “could take 30 minutes for another appliance to get to the town if there was a serious incident”.
The review was confirmed after Rathfriland was left out of a major, Northern Ireland-wide firefighter recruitment process in July 2018.
Commenting, UUP Councillor Glenn Barr says the figures speak for themselves.
“I wish to pay tribute to the members of the NIFRS both locally and nationally. Our local community firefighters go above and beyond what is expected in terms of manning hours and are to be highly commended.
“The very fact that Rathfriland Fire Station is getting busier and busier over the last few years shows that there is a need for two appliances in Rathfriland and there is, without doubt, the need for additional community firefighters.
“The rational behind this threat is that senior management declare that Rathfriland simply isn’t getting enough calls; these figures speak for themselves and I would call on the senior management of the NIFRS to review immediately so that the Rathfriland firefighters can get on with doing their job with the adequate equipment and resources in what they do best,” said Councillor Barr.
His comments were echoed by SDLP Councillor Seamus Doyle.
“These figures highlight the important of the second appliance.
“Our council is one of the fastest growing populations in Northern Ireland. Even in Rathfriland alone, the population is increasing due to the number of houses being built in the town.
“The second appliance is not only important because it is called out to a call but the fact that if the first appliance is out, it is there as a back-up.
“All our other emergency organisations have back-ups so why can we not in Rathfriland?”