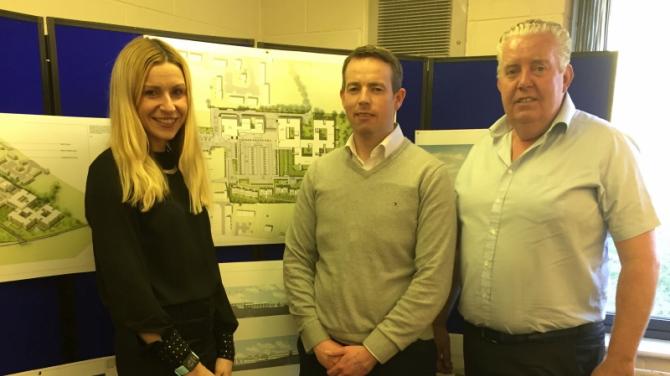 PLANNING permission for a medical village in Rathfriland will be submitted to council within the next fortnight, it has been revealed.

Recent plans revealed a proposal for Newry Street to demolish houses and sheds to allow for the creation of a nursing home, medical village and associated housing.

Mr McConville, who attended the public consultation in Rathfriland last week, says he is “truly excited” about the plans.

“This is a very exciting and personal project for me which will be based on my grandfather’s land.

Locals were consulted last week for a second time by the company and colour 3D representations and artist impressions were unveiled to the public for the first time.

A computerised sketch of the site unveiled at the public consultation.

For many years, the need for a purpose-built health centre, big enough to meet the needs of the growing practice, has been well documented.

Rathfriland Health Centre on John Street faced a further strain on the fabric of its building and services when Dr Sloan’s Surgery on the Castlewellan Road closed in July 2018.

The majority of the 2,700 patients moved to Rathfriland Health Centre or Ballyward GP practice.

The extra patients for Rathfriland Health Centre led to administrative, nursing and doctor hours being increased to cope with the increased workload.

Deborah Loughran, group head of marketing and communications for MJM, was pleased to see the event was well attended by locals.

She added: “It has been six months since we first started to put this plan in front of people in Rathfriland.

“We were conscious that as we approach the date to submit the application to planning service at Armagh City, Banbridge and Craigavon Borough Council the public would want to see final plans.

“Residents will soon be receiving letters, when the application is submitted to council, notifying them and they will then have the opportunity to make representation.”

In the last six months the company has taken drawings for the project through to 3D visuals and are now set in the context around the surrounding landmarks in Rathfriland.

Agents from O’Callaghan Planning who are in charge of submitting the application to council, Barry McStravick, head of property for MJM and MJM director, Brian McConville all attended the consultation.

Mrs Loughran continued: “We wanted to show the public these visuals just before they go in for planning and the planning application is set to be submitted in the next couple of weeks.

“We felt that the last time we were here we had a very positive reaction from the local community.

“In that respect we thought when we had more to show to come back to Rathfriland and show these particular plans.

“A key objective for us will be to get as much support as possible and this consultation was a chance for people to give feedback.”

Ms Loughran says feedback from the most recent consultation has continued to be mainly positive.

“People who visited were also able to see the plans from the view of their own houses so they were able to get an idea of what the whole picture will look like.

“People were also interested to know access areas and one of the key things we have been saying is that the Back Road access will be for emergency and service vehicles only and it is very important in a medical village that there is good access for ambulances in particular.

“Neighbour notifications will be made to those who are living adjacent to or within close proximity to the proposed site. These letters will be received after the application goes through to council and that will give these residents some time to put forward representation.

“The reference number of this application will be kept at the top of the letter and people can keep up to date with that through the NI Planning Portal.”

Mrs Loughran said it was “very important” for Mr McConville to attend the public consultation as the medical village is a project he feels passionate about being delivered.

“We are delighted with the response so far and just a few very minor changes have been made to the plans.

“We are really keen for the community to get behind us with this very exciting project and we believe it will set Rathfriland head and shoulders above similar-sized towns in the north of Ireland.

“It will be such a boost for healthcare and the town in general, we are ready to deliver it and we just need to get the go ahead,” she said.