Speed cut being considered for Barnmeen after car crashes into house 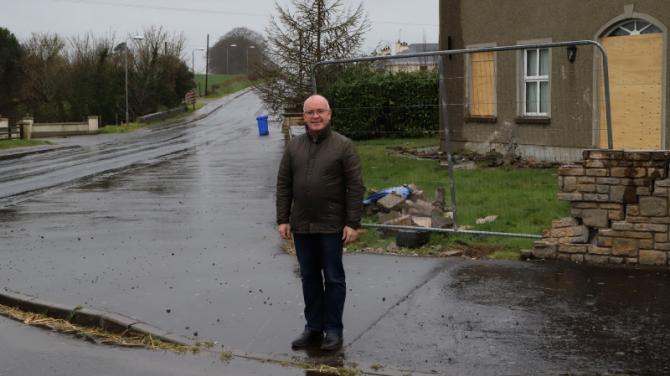 A Barnmeen couple whose home was damaged when a car ploughed into the living room are still out of their home.

A car travelling towards Newry crashed through the outer wall of John O’Kane and his fiancée Deirdre McLoughlin’s home in the Glen Mill development outside Rathfriland back in February.

The newly-engaged couple are still not able to live in the property due to the structural damage.

A reduction in the speed limit to 40mph is being considered by the Department for Infrastructure which John welcomes.

“We are not able to live in the house yet but we have been down quite a bit and you can hear how fast the vehicles go past.

“We were thinking that there needs to be ramps maybe installed. In my opinion I would like to see barriers that separate the footpath from the roadside. We are very lucky no one was killed.

“It has all been unsettling but there is light at the end of the tunnel,” said John.

While it is not yet known if speed was an overriding factor in this incident, traffic can currently legally drive past the housing area at 60mph.

“We welcome this announcement as we welcome anything that can make the area safer.

“There are not only a lot of houses in the area, but there are footpaths which are popular with young families with prams, people out with dogs and walkers and runners.

“The number of people using this will only increase with the summer evenings. If any of these people had been on the footpath when the car crashed, there would have been deaths,” said John.

At the time of the crash, John wanted to make “everyone aware of the dangers” in the area.

“Obviously there is a very high speed limit on the road at the minute. It is a shame that this had to happen to us for this speed reduction to be considered.

“Although it happened to us, it could have happened to one of our neighbours and it is excellent how the local community are pulling together to get safety measures in place. We all want the same thing – for the area to be as safe as possible.”

“I am very pleased with the response I received back which indicated they had carried out an initial assessment and were now considering introducing a 40mph limit in the vicinity of Glen Mill.

“They will carry out consultations with the PSNI in line with NI local speed limits policy. A speed survey will also be carried out over a set period.

“Other consultations including our own council and public notifications will also be carried out. This is the standard mandatory procedure for making a legal change to an existing speed limit which in this case is currently the standard 60mph.

“I am extremely confident the limit will be reduced, but just like the recent speed limit introduction at the Orchard Bar, which I also instigated, it will take some time.

“However, I hope local residents and particularly those fronting onto the main road at Glen Mill will be somewhat assured that their very real fears and concerns are being addressed.

“It is a terrible situation that the young couple whose house the car crashed into, remain out of their home two months after the incident,” said Councillor McAteer.

Commenting on the speed reduction, a Department of Infrastructure spokesman said: “The assessment to consider a reduction in speed limit here is in progress. As a speed survey is required, it will be several weeks before the outcome is available.”

Meanwhile, the PSNI have said that as a result of the one-vehicle collision in the Glen Mill area on 7 February, “a file is being prepared for submission to the Public Prosecution Service (PPS)”.