Doyle out but not down 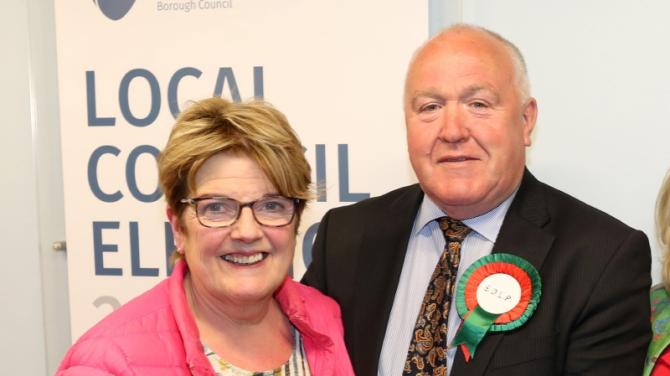 VETERAN SDLP Councillor Seamus Doyle has bowed out of politics after 30 years’ service.

The SDLP representative lost his seat to newcomer Brian Pope from the Alliance Party by just 16 votes.

Although securing a respectable 1,309 first preference votes – his transfer votes were not enough to carry him through.

The outgoing councillor has served Banbridge DEA from the early days of the Troubles and is the former chairman and vice-chairman of the old Banbridge Council.

Speaking to The Outlook, the Closkelt man says he has “not ruled out” a possible return to politics in the future.

The father of three who is married to Marie, said losing his seat is a decision that is made due to the powers of democracy.

He said: “It is a chance that I took each time I put my name down on paper for re-election. I would like to thank my constituency who I have helped to serve over the last 30 years and also those who voted for me.

“I will not say that I will never stand again, but for now I am happy to have helped so many people over the last 30 years.”

The outgoing councillor has been chair of multiple committees over the years on the former Banbridge Council and was vice-chair of the planning committee over the last year.

He was also the only accredited councillor on the planning committee who recently qualified from a Northern Ireland Local Government Association, Local Planning Leadership Programme.

“This qualification will mean I can still help people independently in the community with planning issues. I will still be involved with the SDLP and I still do a bit of farming and also work for the Department of Health two days a week.

“I will also continue to fish and have been a member of Banbridge Angling Club for around the last six years.”

Although Mr Doyle was “disappointed” by the result, he now views life and its disappointments differently after battling cancer 10 years ago.

“When you come through the other side of battling cancer you can come through anything. I have been overwhelmed by the messages of commiseration I have received from cross party representatives in the council.

“I would like to thank all of my family for supporting me throughout the past three decades and also those who continued to vote for me and who gave me their first preference vote over the years.