Gathering in Solitude of people 'fed up' over Stormont situation 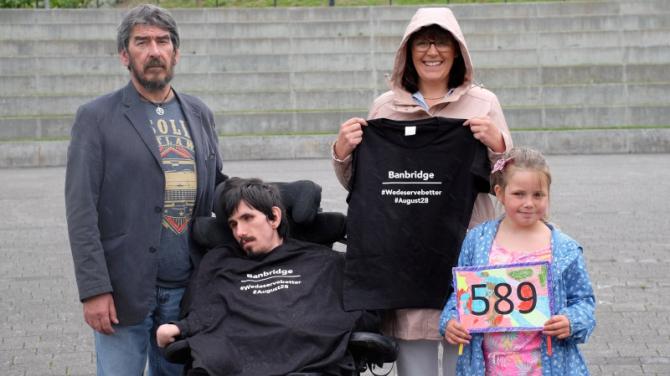 A CAMPAIGN to protest against the Stormont stalemate will take place in Banbridge this month.

People from Banbridge and surrounding areas are invited to gather in Solitude Park on Tuesday, 28 August to show their frustration over the lack of political leadership.

On 28 August, it will be 589 days since devolved government in Northern Ireland collapsed.

Dylan Quinn from Enniskillen, who has organised the province-wide campaign called #WeDeserveBetter, wanted to do something to “get politicians to sit up and listen”.

He said: “I had been feeling like this for a while. People were totally fed up and I put a video up on Facebook explaining that I would like a campaign in Enniskillen.

“From that a small team on social media gathered to say they wanted to do an event too and it really snowballed from there.

“People contacted me to say they wanted to put on an event too in their town and that’s what I had indicated from the beginning, that I wanted lots of towns to get involved too.”

At the time of going to press, 17 towns had signed up for the peaceful, cross-community campaign.

Mr Quinn said: “We are asking for 589 people to come together and demonstrate that it has been 589 days without a functioning government.

“We request that flags and symbols that are likely to distract from the positive campaign are left out of the events and that each person brings a number between 1-589 to highlight the numbers of days we have not had a government in place.

“On the day of the campaign, Northern Ireland will be the world record holders for the longest running democracy without a government and I think that’s ridiculous.”

Banbridge organiser Paul Scappaticci, along with Tracy Duggan, are preparing for the local demonstration in Solitude Park.

Mr Scappaticci, who owns Banbridge Community Radio Station, said: “I run the Banbridge Saints and Sinners Facebook page and it was Tracy who put a message on it to say how disgusted she was with the situation and asked if anyone could do anything about it.

“I had said about Dylan organising the event in Enniskillen and I contacted him about running one in Banbridge and he told me to go ahead. It is up to us to manage our own campaign.

“It is happening in the theatre space in Solitude Park and will take place at 7pm, at the same time as every other event in the province.”

Mr Scappaticci said there has already been a lot of interest ahead of the event.

He added: “We only recently put it up on our Facebook page for Banbridge and it has grown every day. We are hoping for a big turnout.

“People need to know about this campaign far and wide. It is an opportunity for everyone to show their discontent to what is going on.

“These politicians are not working, yet they are still getting paid and have also had a pay rise in fact! Where else would this happen?”

The Banbridge man says any political flags or posters will not be welcome at the event and will be removed.

Over 300 people have already shown interest in the event on Facebook and you can find out more about the upcoming event at the Facebook page: ‘We Deserve Better: Banbridge August 28’.