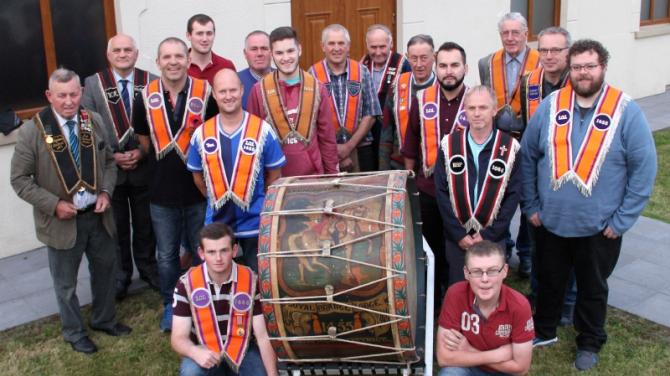 A LAMBEG drum that hasn’t been played for a century will be beaten at the top of Slieve Donard for charity.

Legananny LOL 1455, in conjunction with Legananny Accordion Band, is organising a walk up Slieve Donard with hikers taking turns to carry a Lambeg drum to the peak of Northern Ireland’s highest mountain.

The ‘Donard for Drew’ event on Saturday, 8 September is in support of the Drew Nelson Legacy Project.

The project was unveiled last year to permanently recognise the contribution of one of its most high-profile members.

The Dromore solicitor served as Grand Secretary of the Grand Orange Lodge of Ireland for 12 years and was first elected in December 2004.

Sammy Heenan, secretary of Legananny Lodge and bass drummer in the band, said “the climb will raise money for the project as well as remembering Mr Nelson”.

“Drew was a huge figure in the Orange family and was greatly respected by all of the members and did so much for the institution.

“I would have known Drew in a personal capacity, he was an absolute gentleman and his loss is still very much felt within the Orange Order.

“Drew had so many friends and he was very progressive. He lived and breathed Orangeism.

“Within his own personal capacity he was always there and willing to offer his expertise to any individual member or lodge who required advice.”

Sammy says the legacy project was created due to Mr Nelson’s passion for young people within the Orange Order.

“The Loyal Order created the project which intends to expand its current student provision in the university area of Belfast with the ultimate aim of creating a standalone 'Drew Nelson Centre'.

“It will provide meeting space and accommodation for student members and will help young people in whatever way possible, especially those going into third level education.

“There have been many events over the last year for the project and we thought we would go outside the normal parameters at Legananny and walk up Slieve Donard with our Lambeg drum.”

Sammy continued: “The drum we are taking up hasn’t been played in around 100 years. From the formation of the flute band in the early 1900s the drums were no longer required and were then housed in the attic of the hall. Three years ago the new heads were put onto two drums in memory of two deceased brethren, Bro Robert Priestley and Thomas Irvine.

Sammy says the event has already generated a lot of interest from those within the Order and members of the general public. There will be a collection taking place on the morning of the walk.

“There are potentially 45/50 of our own members going up. Our lodge and band are thriving at the moment, we have a young membership and many of them are participating.

“We are encouraging people who are members of the Orange Order to bring their collarettes on the day and if they don’t, it’s not an issue – everyone is welcome to participate.

“We are really looking forward to the event and it will be a great day. Some who are doing it are experienced walkers and for others, it is their first time climbing Donard.”

The walk on Saturday, 8 September is leaving Donard Car Park at 9am and not the Bloody Bridge car park as originally planned.