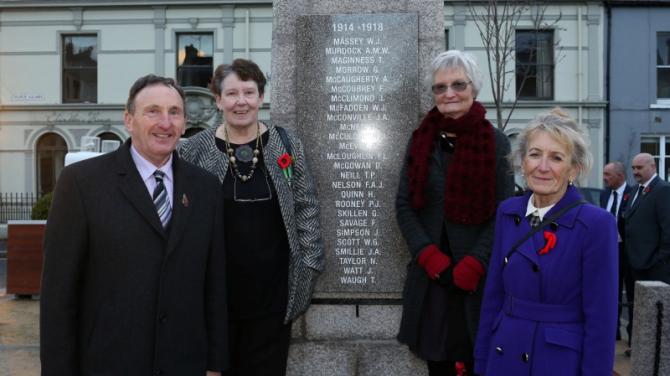 The names were added to the town’s war memorial in The Square and David Lindsay, Lord Lieutenant of County Down, was in attendance at the poignant event.

Research through a new book entitled ‘From Hilltop to Over The Top’ led to the discovery of these local soldiers who fought in the First World War.

Drumlough and District Historical Society, as well as Rathfriland branch of the Royal British Legion, came up with the idea of producing the book three years ago.

And 18 families of the 51 fallen soldiers were contacted by the researchers while the book was being compiled.

The Outlook spoke to three local relatives of the fallen soldiers who said they were immensely proud their relatives’ names were added to the memorial.

Brian McArdle from Ballyroney is a relative of Private Peter McNeil whose name was added to the memorial.

Peter’s family lived in house 76 at ‘The Mount’ Ballyroney and his regimental number was 202466.

He was the son of John and Agnes McNeil and had at least two brothers and three sisters.

Peter joined the 2nd Kings Liverpool Regiment and was then transferred to the 5th regiment.

The Ballyroney man died of his wounds on 10 August 1917 and his regiment fought in infamous battles all over the world.

Peter was a brother of Brian’s grandmother, Mary Alice McNeil and due to the date of his death he would have died fighting during the Third Battle of Ypres.

Brian said: “I feel very proud that his name has been added to the memorial and that he will not be forgotten about. I was very interested to speak to the researchers of the book.

“My grandmother lived a long life but I don’t remember her talking about him that much. Peter had two brothers who moved to Glasgow at the start of the 1900s and another brother who farmed locally.”

Brian was looking forward to seeing Peter’s name on the memorial.

“I will certainly go to see his name added and the house where he was reared along with his siblings still stands in Ballyroney. It is now used as a potato store and was a big farm house,” he added.

Peter is buried at Mont Huon Military Cemetery, Le Treport. This cemetery was built after the original Le Treport cemetery was filled from casualties from the three nearby casualty stations.

There are now 2,128 commonwealth burials of the First World War in the cemetery and seven from the Second World War. The cemetery also contains more than 200 war graves.

Following his death his soldier’s effects would have been passed onto his family.

His father John received £5 and 10 shillings of a war gratuity for Peter’s service in the war.

Tommy McClimond from Scarva is a relative of Rifleman John McClimond (pictured right) whose family originated from Burn Hill, Banbridge.

His regimental number was 5421 and he served with the 7th Battalion of the Royal Irish Rifles.

He then transferred to the 5th Battalion, according to his medal roll, but then moved back to the 7th at some unknown point.

John died on 9 September 1916 at the battle of Ginchy and he was little more than a boy at the time of his death.

There were many young men like him who fell in battle, gone before their time.

Tommy said: “I am glad to see that his name is going on the memorial. It was very sad what happened to him, he was just a young boy.

“John also had a brother named William, he survived the war and later moved to Canada. I am happy that John is being recognised for his services, however, it is very sad that someone of that age would have to go to war and die.”

Tommy continued: “My dad didn’t talk much about his cousin, there would have been a fair age gap between them. But he will always be remembered by our family for his services to the war. His family originated from Rathfriland and then moved to Banbridge at a later date.”

Newry woman, Jeanette McConnell was a former teacher at Rathfriland High School, and is the granddaughter of Archibald (Archie) Marshall Weir Murdock.

Fusilier Murdock’s regimental number was 24053, he was born in 1889 at Savalmore in Newry Civil Parish.

He was the only son of Marshall Weir Murdock and Nancy Murdock of 2 Talbot Street, Newry and Archibald and his wife Sarah lived there with his parents.

In the census of 1911 Archie is recorded as working as a mechanic, with his father Marshall working as an estate bailiff.

Archibald enlisted into D company of the 9th Royal Irish Fusiliers. He qualified for the British War Medal and Victory Medal.

Archibald was first posted missing on the opening day of the Battle of Langemarck on 16 August 1917, before finally being recorded amongst the fallen on 16 August aged 31.

Private Murdock is remembered on the screen wall of the Tyne Cot memorial in Belgium for those with no known grave.

Jeanette, who taught at Rathfriland High School for 19 years, still has strong connections to the local area.

The Newry woman said: “Archie was my mother’s father who tragically died before ever meeting her. He left for the war in July 1916 and my mum was born in December 1916.

“He knew that she was born and he knew that he had a daughter, but he never made it home alive to see her. Him and my granny had only been married for a couple of years before he was posted.”

Jeanette says as a child her grandmother never spoke about her late husband.

“We never really understood it and my grandmother would only have spoken about her husband on Armistice Day, she was widowed for many years.

“I have cards that my grandfather sent to his family from war and I have them framed.”

Jeanette says she is very pleased that her grandfather’s name has been added to the war memorial.

“It is lovely that he is being recognised and he will always be part of our family. However, I am sad too that my mother never met him and these men who went to war were just wiped out as if they meant nothing.

“My grandmother was a widow for the rest of her life and she died when she was 81. My uncle died just a year after my mother did, they were very close.

“They grew up so long without their father. After his death on 16 August 1917 his family continued to grow and went on to do lots of things with their lives.

“My grandfather was an only child and he actually ended up with a big family. The Murdock name will continue through my cousin John his now extended family.”