One woman protest over Rathfriland hunt 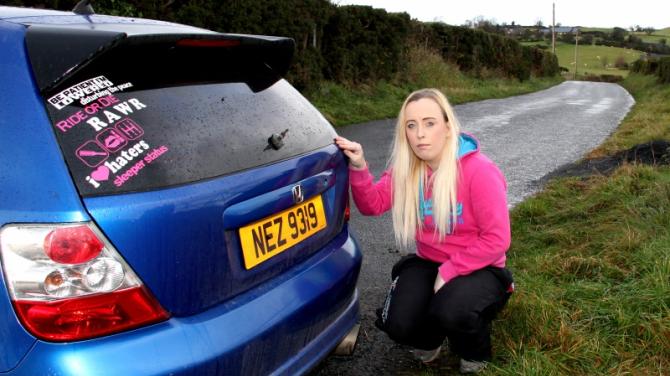 A WOMAN who attempted to thwart a hunt in the Knock area says she was “appalled and disgusted” by the torrent of abuse she received.

Mother-of-three and animal lover, Holly Mitchell parked her car across the Iveagh Road to prevent a hunt getting through last Thursday (22 November) afternoon.

As a result of her actions, Holly’s car was damaged and she was verbally abused for “taking a stand against hunting”.

The Knock resident was made aware of the hunt by her father.

She said: “I went out and got my cats inside, along with my neighbour’s kitten too who was out at the time. I would say there were around 30 dogs and many horses coming.

“The hunt went on up the road and I decided I was going to make a stand, annoy them and try to prevent them from getting to where they wanted to go.

“I jumped in the car and followed them for a while to see where they were going.”

Holly then stopped with those involved in the hunt to ask what kind of hunt they were doing.

She said: “I stopped first with one of the men on a horse and asked what they were doing and he said they were blood hunting.

“I then spoke to others in the hunt and asked them what they were looking for and they told me they were out for anything that popped its head above ground.”

After being told the hunt was for blood, Holly decided to barricade the road and stream the events on Facebook Live.

“This is something I have never done before and I see hunts going up and down my road once or twice a year.

“The hunt last Thursday was very disruptive and the neighbours couldn’t get down the road.

“After being told the hunt was for blood I put the car in the road, more to annoy the hunts people than anything, rather than completely block it.

“I wanted to show them that there’s people like me out there who aren’t going to stand for this. It’s not on.

“However, I got a lot of abuse. A heap from those on the horses, to those on the ground and those who were following the hunt too.”

As an animal lover, Holly says she tries to stand up for animals rights as much as she can.

“Doing something like this would be out of character for me, but I just saw red and I got really annoyed that they were coming up my road to do this sick sport to see a bit of blood.

“Eighty pet cent of the population are against blood hunting in Northern Ireland and I feel it has no place in society.

“I felt like I needed to stop it, even though I couldn’t, but I thought I would at least try.

It was at this point that Holly says her car was damaged by those who attempted to get past.

She continued: “The first man who did took a big scuff out of my bumper and the second young man in a pick-up scraped the boot badly too.

“I was there for about an hour and a lot of people came up to me to say that they were ringing the police on me too, and although I never reported the damage to my car, I will do so now.”

Holly says she feels disgusted by the actions of those involved in the hunt.

“This was a peaceful protest from me. I stood outside my car and a man went to jump into the driver’s side to move it and I had to pull the keys out.

“I also had threats that they were going to roll the car. In the end, some of the hunts people put their horses into trailers and left and others carried on up the road with the hunt.”

Holly claims the hunt was also trespassing on private land in the Knock area.

Holly says despite not being given notice of the hunt, she would appreciate if it didn’t happen at all.

“If you asked most of my neighbours they would also share my view that they do not want to see a blood hunt here at all.

“Usually what these hunt people say is that it is a country tradition, but times have changed and modern society has moved on.

“Apart from sick entertainment for these people, there is no real justice in it for the poor animal.

“Scientific evidence has also shown that animals targeted suffer physical and mental stress when chased, whether killed or not.”

Despite taking a stand against the hunt, Holly says she wouldn’t stage a lone protest again.

She added: “I wouldn’t do it again on my own, it was a gruelling time. A lot of abuse was said to me. It was disgusting the words that were coming out of the mouths of these people.

“I had never planned to do something like this, it just happened.”

Meanwhile, a PSNI spokesperson said they received a report of a car causing an obstruction on the Iveagh Road last Thursday (22 November).

The statement said the same road was cleared later that afternoon.

Attempts were made by The Outlook to contact the group who had organised the hunt but to no avail.