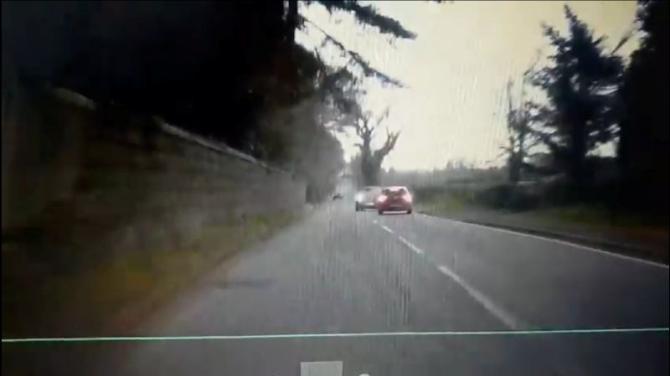 DASHCAM footage capturing a near head-on collision in Kilkeel has been described as “absolutely shocking”.

The footage was captured in the Newry Road area near the entrance to Mourne Park this month.

It first appeared on the Facebook page ‘Idiot Drivers Northern Ireland’ and has been viewed over 90,000 times.

The dashcam footage was filmed from the vehicle behind and shows the driver in front drift over onto the opposite side of the road straight into the path of oncoming traffic.

A driver then had to swerve at the last moment to avoid a head-on collision.

Police have since received a report of careless driving in the Newry Road area of Kilkeel and said the matter is currently under investigation.

Sergeant Dickson said: “No complaint was made by the person who reported this incident but an officer identified the vehicle involved and spoke to the female driver.

“I would remind all motorists that driving on the public road brings with it responsibilities - to drivers and passengers, their families and friends and to the community as a whole. These responsibilities should not be taken lightly.”

Meanwhile, the shocking footage has been condemned by Mourne representatives.

He said: “I had a number of people who sent me the link and I just couldn’t believe what I was watching.

“The driver who avoided the car coming towards him narrowly avoided a serious head-on collision by getting out of the way in time and they managed very well.

“This is a very busy road and when you are travelling on a road like this you have to be careful and pay attention at all times.

“This was the first time I have seen such shocking driving in and around the Mourne area. It is shocking that this sort of driving happened on our doorstep.”

Councillor Quinn added: “People need to be aware that traffic in this day and age moves quicker. We are now coming into bad weather and I would urge people to be cautious, especially young drivers.

“The road conditions are not the same as they are in good weather and you have to have good stopping time.

“I would use that footage as a prime example to show people exactly what not to do. I was shocked by what I saw, it was a very silly manoeuvre and whoever made it didn’t give oncoming traffic a chance.”

Councillor Quinn said there could have potentially been a very serious accident.

“If there had been traffic coming the other way it could have been a lot worse. People need to allow more time for their trips and be aware of what is going on around them.

“While this near accident was on a main road there would have been worse consequences if it had of been on a rural road with less space to manoeuvre.

“There has been bad accidents on that stretch of road and a serious accident a few weeks ago only a couple of hundred yards from where this near head-on collision took place.”