NI Water get to 'root' of Hilltown flooding problem 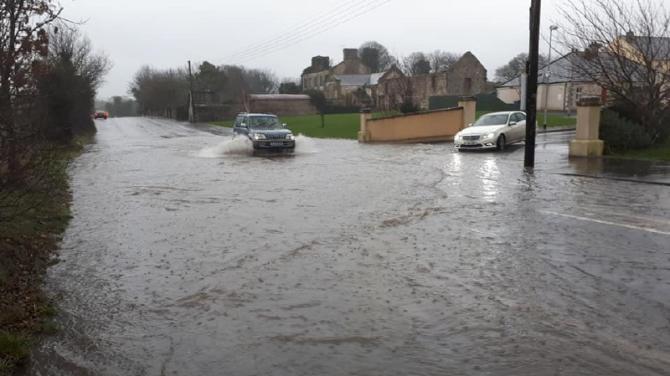 Last Tuesday (27 November) saw prolonged rain showers which subsequently led to some unprecedented flooding on the main street in Hilltown.

Residents at Mourne View and the Castlewellan Road feared potential water damage to their homes as flood waters increased in the area.

However, while the floods caused difficulties for motorists and pedestrians, it has been established that the usual suspect – blocked gullies – was not to blame on this occasion.

A spokesperson for NI Water confirmed to The Outlook that trees, or more specifically, their roots were the cause of this flooding incident.

Denis Murray, NI Water’s wastewater customer field manager for the area, said: ‘‘We quite often talk about getting to the root cause of the problem, but we rarely mean it so literally.”

He said NI Water “fully understands the frustration caused to residents” following the “out of sewer flooding” during last week’s heavy rainfall.

“NI Water staff investigated and found that the ‘root cause’ of this was a build-up of tree roots, restricting the flows in the storm sewer,” he said.

“NI Water staff carried out a CCTV survey on the sewer, confirming the presence of tree roots.

“NI Water teams will remove these in the coming days, which can take approximately between five to 10 days to complete.

Councillor for the area, Gillian Fitzpatrick said she had been pleased to see staff out working on the issue.

“Some of the residents contacted me about the flooding and I touched base with the Department for Infrastructure (DfI) to say they had to get it sorted,” she said.

The SDLP councillor said blocked gullies were adding to the problem and leading to flooding in Hilltown and on country roads around Mayobridge.

“I have made about 20 reports to the department about it.

“To be fair, I have seen the staff out, but they have maybe not been out as far as they should be. They are doing the work, but it takes a lot of time to do that.

“I rang about roads near me which have the same issue. It’s keeping on top of that and letting them know what’s going on.

“I am not excusing them, but they need to keep at it all the time, not just on one-off occasions,” she said.

NI Water said they were addressing staffing levels as part of their winter schedule.

“NI Water operates a 24/7 out-of-hours emergency service, staffed with NI Water personnel and backed up by contractors, to deal with all issues including flooding,” they said.