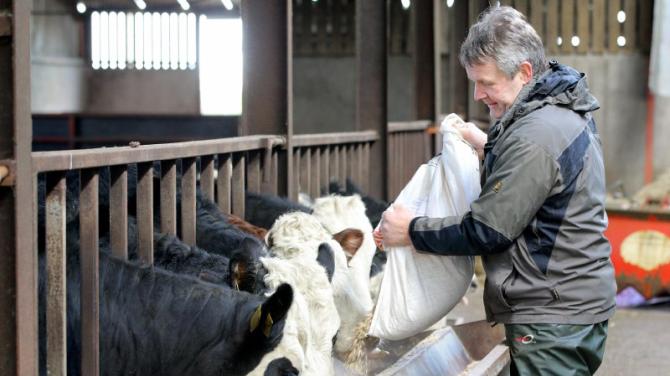 “THE farming industry here could not compete if there is a no-deal Brexit.”

This is the stark warning from former president of the Ulster Farmers’ Union, Barclay Bell.

A full-time farmer, Barclay is based at Moorfield Farm in Rathfriland and understands only too well the potential impact there would be if a deal was not secured ahead of the UK leaving the European Union.

In the wake of the Brexit withdrawal agreement garnered by Prime Minister Theresa May, Barclay said there was “no other deal out there”.

“As a farmer running a business, I am looking at this purely from a business point of view, I have to stay in business.

“For me, to head to the end of March with nothing else on the table, is just not on.

“World Trade Organisation (WTO) rules and tariffs are what we are facing.

“Taking into consideration 40 per cent of our lambs are processed in southern Ireland, if there were WTO tariffs it would become prohibitive. That export trade would not happen.

“That means that all those lambs would have to be processed in the north of Ireland but the capacity is just not there. Be it for sheep or milk processing, it is an issue.

“Through time it could maybe be fixed, but there is going to be a period of time that if we head into this situation and a WTO situation, they could face meltdown until there was something else in place.”

Such is his concern about the alternative to the current agreement on offer, Barclay said he would be “seriously concerned” for the outcome of the agriculture and processing sectors in the next few years.

“The other thing is that imports we use, like fertiliser, a lot of it is imported from outside the UK and that will be hit with tariffs and the price of sprays and machinery are going to carry fairly heavy tariffs.

“The agricultural sector and products carry some of the heaviest tariffs under WTO rules. It’s not a desirable situation to not have a deal.

“I think, as all businesses right across Northern Ireland have said, we are all trying to run businesses. In a year or two, I would be seriously concerned, not only on the ground, but for the processing sector there would be major problems,” he said.

Barclay completed his two-year term as president of the UFU in April of this year, having served as deputy president for four years before that.

It was during his tenure as president that the UK voted to leave the EU, so he is well aware of the impact on the farming community and the concerns of those within it.

“I think, wearing my old UFU hat, we did say that we cautiously welcomed the deal.

“Yes, there were concerns that if we were operating under EU regulations, would our quality assurance standards allow us onto the UK market.

“We were given assurances there will be no blockages getting into the UK market, which is our biggest market.”

However, he added that access was also needed to the EU market.

“There is a lot of product which we, as UK consumers, do not eat such as brown meat from chicken. Our processors have to export that somewhere else and they have to have access to those sorts of markets.

“Trade deals take time. They will not be signed off quickly and some of them could take eight to 10 years.

“If we went to WTO rules with a no-deal situation, what you would find is that food prices would probably start to rise in the shops. Any product coming in will carry a seriously heavy tariff.

“The government might let that run for a while, but if we still have a Tory government they will say we have always had a cheap food policy in the UK. But the threat to that will be the government, whichever one it is, will open the door to cheap imports. As a union, we recognised that at a very early stage.

“I was in Washington a year ago and they said that the UK need not do a deal with the US if it wasn’t prepared to take their chlorinated chicken. If that was the case we have a serious problem on our hands. As a farming industry here, we could not compete.”

Barclay said the UK as a whole “is still only 62 per cent self-sufficient in food”.

“That figure has dropped over the last period of time. If there was a further decline in the industry where production fell, that self-sufficiency is going to drop further.

“Our government, as consumers has to decide if they want to support the local industry or do they want exposed to cheap food from somewhere else in the world?

“There is also an environmental argument to this, including the transportation of food from further away.

“Importantly, we have some of the safest food in the world produced in the UK and Northern Ireland.”

While he has not been involved in any negotiations on behalf of the UFU since his time as president ended, Barclay said the direction from its members was clear.

“The clear steer which the union has taken and it is taken from the Executive Committee of the union, is we cannot go down the route of a no-deal situation.

“It is very, very evident that our members realised that to head for a no-deal situation - the farming industry is in big trouble.

“I am not interested in the constitutional politics of all of this. I think there is a lot of that being played out here.

“As a farmer, all I am interested in is that I have a viable business this time next year. You can see in the way the whole business world has come out, they are all thinking the same way.

“Being stuck on a political or constitutional focus, that does not pay this bills. I am fully focused on what it means for myself and the wider farming community,” he said.