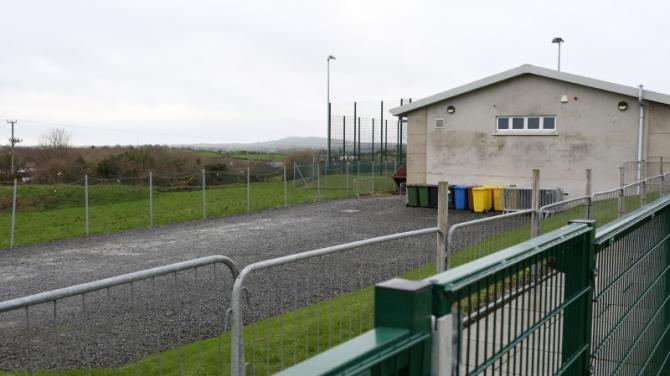 Proposals have been drawn up for an all-inclusive community/ sports hub for the Moneyslane area.

The applicant is Moneyslane Rural Community Hub, a charity whose aim is to develop the community of Moneyslane and surrounding areas. The plans are for an “all-inclusive hall” and 100-seat spectator stand within the grounds of Moneyslane Football Club.

Thomas Jennings from the Hub said creating something that would benefit the local community has always been the vision.

“The Moneyslane Rural Community Hub has been providing a summer scheme at Jubilee Park for children in the area for the past year or two which has been greatly supported.

“This project was brought about because of the general need for services in the Moneyslane area, a large all-inclusive hall, multi-purpose gym and enterprise units.

“Something for the community as a whole to use because the club grounds already facilitate a number of groups for example the Boys’ Brigade, cycling clubs, fitness classes, charity fundraisers, dart and pool teams.

“The lack of a large building has led us to the point where we need a bigger indoor space to account for the inclement weather. It was the next logical step for the football club.

“The pitch and changing rooms were completed in 2014, and after a period of settling in, it is now time to move forward with the next big project.”

It has been proposed that the existing club block and toilet facilities within the football club grounds would be replaced with the two-floor community/ sports hub providing a gym, a social enterprise unit, a physio and sports injury clinic, changing facilities, toilets, a reception, a management office, a function room, a kitchen, a club room and external spectator seating for 100 people.

Mr Jennings described the project as being in its infancy and, once and if, plans are passed by Armagh City, Banbridge and Craigavon Borough Council, they will seek to secure funding for the project.

“Funding is obviously the next big hurdle and it will be looked at more closely if the plans are passed.

“The design of the building is to benefit everyone from the Moneyslane area and hopefully our dreams will be achieved,” said Mr Jennings.

The ‘dream’ of what Moneyslane Rural Community Hub hope will be built at Jubilee Park.