Meeting on future of Kilkeel campus 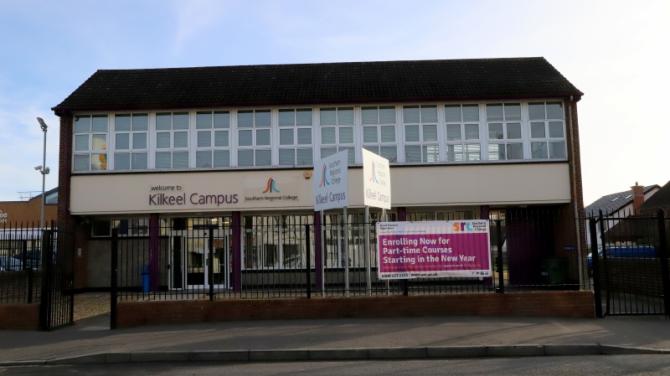 There are fears for the future of the Kilkeel campus of the Southern Regional College (SRC).

A public consultation meeting regarding its future is set to be held this Thursday (24 January) evening in the Greencastle Street building.

In a public notice, the SRC stated that the meeting was being held “to discuss the college’s plans and ongoing developments regarding its estates strategy”.

“The SRC Estates Strategy recognises the need for decisions to be taken with regard to the future of the Kilkeel campus and indeed all our campuses, through consultation, with college stakeholders”.

Mourne politicians are encouraging people to attend the meeting this Thursday (24 January) at 6pm to share their view.

SDLP Councillor Brian Quinn, a student of the former technical college and ‘night tech’, said he “had a great experience with my time in further education right up to adult education”.

“I would encourage everyone to come along to give their opinions,” said Councillor Quinn, who added that the classes available in Kilkeel can “enhance CVs”.

“There is always another option of taking college classes at the ‘night tech’ which are a lot less pressure and can add so much to their CVs and further chances of employment,” he said.

Meanwhile, Sinn Fein Councillor Sean Doran said politicians have not been told anything about the meeting, other than it is happening.

“I attended a meeting a few months back when the SRC said they had money there to be spent on courses in Kilkeel. We told them about local youth clubs and groups that they could contact to make them aware of the courses available.

“It is a great facility in Kilkeel and I would encourage people to come to the meeting as it will be a case of use it or risk losing it,” said Councillor Doran.

“I would encourage as many people as possible in the Mourne area to come along and engage in this latest consultation on the future of the Kilkeel SRC campus.

“The Kilkeel campus plays a vital role within our local economy, providing much-needed opportunities for students of all ages allowing them to be much more employable. The benefits of a local SRC campus in Kilkeel have genuine positive influences within our local community of Mourne, and I would hate to see the town lose this.

“Before Christmas I met with SRC’s assistant director for community schools’ partnership and external funding, David Vint, along with Councillors Brian Quinn and Sean Doran to help launch a new PROSPER project, funded by the Department of Agriculture, Environment & Rural Affairs and delivered at Southern Regional College.

“This project was to provide relevant training programmes and help local people gain employment within the Kilkeel area. We discussed how this new project will deliver a programme of skills and opportunities to local people and the wider rural community as a whole.

“I do hope that local people make their voice heard when it comes to securing the future of the Kilkeel SRC campus. As a past student of SRC, I benefited greatly from the learning experience that I had and this most certainly opened vast opportunities for me and many others. I feel that it would be a real shame for such a great facility to be lost in Mourne, which would indeed lead to more social isolation of our local community,” said Councillor Macauley.

The SRC has six campuses throughout the two districts - Armagh, Banbridge, Kilkeel, Lurgan, Newry and Portadown. It is the largest Further and Higher Education College in Northern Ireland, outside Belfast

Just last week the SRC was given the go-ahead to create a new £45 million campus in Craigavon. It is also investing £35 million in Armagh and £15 million in Banbridge and work is on schedule and on budget for planned completion in 2020.