Warning to use  Kilkeel SRC campus or lose it 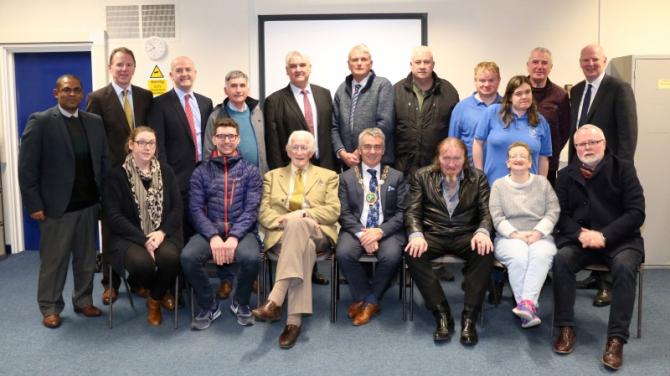 The Kilkeel campus of the Southern Regional College (SRC) will face closure if it no longer becomes viable in the next few years.

This stark warning was made by a director from the college at a heated public consultation event on the campus’ future in Kilkeel last Thursday (24 January) evening.

Around 30 people, including politicians and representatives from the Kilkeel business community and local schools, attended the event which was hosted by the SRC in the Greencastle Street campus.

SRC admitted to those in attendance that the Greencastle Street campus had a “significant hurdle to jump” and that there were “enormous challenges” on the site as the campus was faced with “decreasing enrolments and significant underutilisation”.

Raymond Sloan, Director of Client Services, delivered a presentation to those who attended which highlighted what they described as “some issues” with the Kilkeel campus.

The meeting heard that while all colleges within the SRC had “seen a reduction of 10 plus per cent in income over the period 2011-18, which equated to £3.5m”, the SRC were and are going to invest £95m in ongoing developments at the Armagh, Banbridge and Craigavon campuses and that there is “a desire” to consolidate the three campuses in Newry to one in 2023.

However, the meeting also heard there would be “a heck of a journey to justify a new build, extension or refurbishment” in Kilkeel due to the dwindling numbers but the SRC said this “does not mean to say that the college is not prepared to do that”.

The meeting heard that the two-storey building which was built in 1961, has no internal lift and that the enrolment figures have dropped from 500/600 in 2007/2008 to less than 100 in the current year.

Mr Sloan also said that 68 per cent of the courses that were offered in the past five years were cancelled.

DUP Councillor Glyn Hanna posed the question “have you asked why this has happened” to which he was told it was because there were only “two or three people” interested in the course.

SDLP Councillor Brian Quinn said he “used to be able to come into the campus and get a brochure that listed the courses being done in the college but now you have to go to Newry and search through that massive amount to see what is happening in Kilkeel”.

“With all due respect, I do not think you have tried to present the college here. It is all very well to say that it has been underutilised, but you have to ask the question why it has happened,” said Councillor Quinn.

When DUP MLA Jim Wells queried those classes which are “high in demand in Newry” and asked “why can you not offer these type of courses in Kilkeel?” Mr Sloan said they “believed they would not come”.

Chief Executive of the SRC Brian Doran added there “were very limited facilities in Kilkeel” and that “had to be factored in”.

“We are here to listen to your ideas and suggestions but we also have to present the facts,” said Mr Doran.

However this led to Councillor Hanna stating that the SRC had “taken courses away from Kilkeel” as it had once been “a centre for carpentry and joinery”.

UUP member Harold McKee said the SRC “need to invest in a modern campus for Kilkeel, like they have done for the others, and then people will flock to it”.

A former Director of Newcastle College who attended the meeting, said she “recognised the pattern” and criticised SRC that the “title of your meeting gave a very negative vibe”.

“I thought from the title of the meeting that you are going to close it. If you want to be proactive, you have to take a more positive approach to engagement,” she said.

When it was raised that people were not wanting to attend the courses in the college, Kilkeel Chamber of Commerce President Alan Knox said he had “the numbers for a first aid course” but he had been told he would have to go to Newry for it as “it was not going to be run in this campus”.

The meeting heard the campus has a partnership with the two secondary schools in the area which saw pupils attend the Kilkeel campus on a weekly basis but that now “in both schools, all students are coming to the Newry site”.

Sinn Fein Councillor Sean Doran then questioned why there were “not many members of the public at the meeting” and asked if it was down to “no interest or the fact that the meeting was not advertised well”.

Alan McCulla’s view that “there would have been more people here if it was not at 6pm” was agreed with by all those in attendance at the meeting.

“I do get the challenges you are facing. Mourne is in a good place at the minute,” he said, adding that he needed someone to teach English to those who use the harbour and said that “this room we are in would be ideal for that sort of thing”.

Mr Sloan said the college offered an ESOL (English for Speakers of Other Languages) course in Kilkeel but they had no interest in it, which received the response that it was because no-one knew about it.

A representative from Sea Source told the meeting there appeared to be “communication issues” and “a disconnection” between the college and the public.

“We are faced with this stark picture. We are asking ourselves do we need a physical building to have a presence in Kilkeel or can we do it some other way?” said Mr Sloan.

Mr Doran said there “was no specific timeline” for this consultation and that “our governing body fully recognises the unique position of the Kilkeel campus”.

“We are not profit-making but we cannot continue with this type of loss,” added Mr Sloan, who was then asked if SRC “were prepared to invest in Kilkeel?”

“We invest in viability and at the minute Kilkeel is not seen as viable,” Mr Sloan responded.

The meeting also heard there was no campus manager on site at the minute as the SRC “cannot justify it”.

“It would be a real travesty if you were to pull this out of Kilkeel,” said Independent Unionist Councillor Henry Reilly.

One of the issues that the SRC said they were challenged with is the fact that a lot of sports clubs or community groups have been able to secure money to hold certain classes that the college would have ran in Kilkeel, for free.

Mr Doran agreed that “we need to explore a better understanding of what the skill needs are in Kilkeel so that we can better inform the curriculum”.

He said he hopes that through engagement with the Kilkeel community over the next few months, they will be able to “put together a realistic, meaningful curriculum offering for September”.

Mr Sloan said that the SRC was “glad of this engagement as we want a viable, buzzing campus” and he was “delighted to hear such enthusiasm on the floor and work in Kilkeel”.