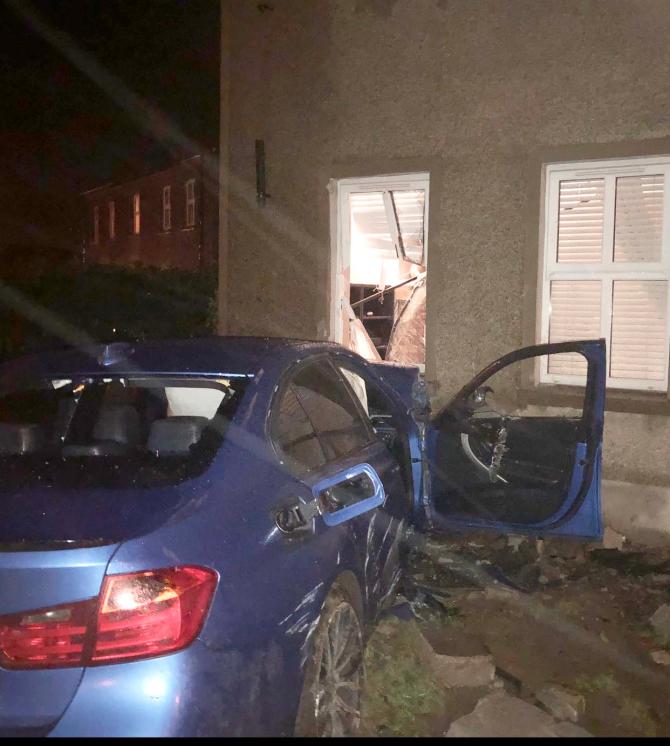 A BARNMEEN couple say their lives have “been turned upside down” after a car ploughed into their home.
The young couple Deirdre McLoughlin and her fiancé John O’Kane who live in the Glen Mill development, one mile from Rathfriland, have been left traumatised after the crash.
A car travelling towards Newry crashed through the outer wall of their property, hitting the front door and living room window.
Due to the impact, bricks from the wall smashed through the living room window and front door, narrowly avoiding the woman and her friend inside.

The couple, who have young nieces and nephews who visit their home regularly, say they want more safety measures implemented on the main Newry to Rathfriland Road outside their home.
“This road has a 60mph speed limit and there are a lot of young children who live in this development and are out a lot of the time on their bikes and toys. This could have been a very different story.
“We now want to ensure our community is a safe place to live in. A lot of our neighbours are getting behind us too to push for a 30mph or even 40mph speed limit on this stretch of road.
“Most people here have a young family, so it is something that they will very much be behind us with.”
Meanwhile, the PSNI said they received a report of a one-vehicle collision in the Glen Mill area at around 9.45pm on Thursday (7 February).
Sergeant Gallagher said: “It was reported that a car struck a property and an outer wall in the area.
“Damage was caused to the wall and a house in the area. There were no reports of any injuries.”