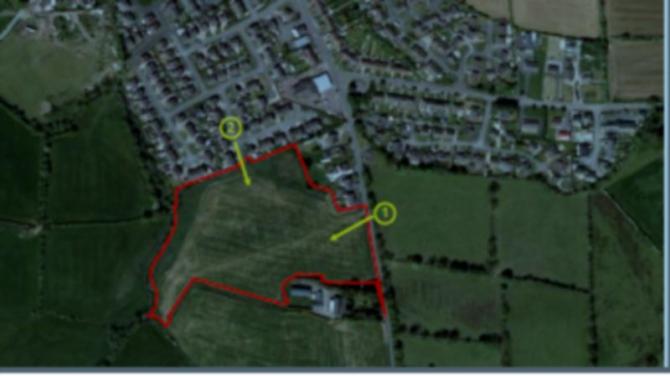 AN outline proposal has been revealed to create up to 50 new homes and employment units in Dromara.

Land on the Rathfriland Road has been earmarked for the mixed-use development which will seek planning permission from council within the next few weeks.

The public was invited to express their views on the proposals for the mixed-use scheme prior to the applicant submitting an outline planning application to Lisburn and Castlereagh City Council.

The site is on the southern fringe of the village on land beside and to the back of several properties on the Rathfriland Road.

It will extend to 3.7ha (9.14 acres) and bounds Rathfriland Road to the east, the River Lagan to the west and Woodvale housing development to the north.

The proposed development comprises approximately 50 homes, including a range of detached, semi-detached and terrace properties.

Approximately 2,500sq metres employment floorspace and associated parking has also been revealed as part of the development plans.

Mr Starkey also delivered flyers to properties within 200 metres of the site to inform neighbours of the consultation event.

He added: “We did have a steady stream of people through the door and this included local residents and other people who were looking to potentially purchase a property within the area.

“We also had a representative attend from a local community group and local councillors too.

“Those who attended the event were encouraged to complete comments forms. Several forms were completed at the time and we also supplied details for people to get in touch with ourselves to provide comment at a later date should they wish.”

Mr Starkey said he has received feedback from the public regarding the proposed plans.

“It was apparent to me that Dromara has a very active community. We have received several email responses since the event and I would say around 40 to 45 people attended the public consultation on the day.

“Like all public consultation events such as this, there were some people who were opposed to the plans. In particular, residents living in close proximity to the site were concerned that they would lose their views.

“It was explained to attendees at the time, that the forthcoming application would be submitted in outline, with detailed matters relating to the scale, design, and layout of the proposed development being reserved for subsequent approval.

“The primary goal at this stage is to establish the principle of this development and further details would be clarified further down the line should outline planning permission be granted.”

Pre-application discussions were held with the council earlier in 2018, and a Proposal of Application Notice was submitted to council in December 2018.

He continued: “We are in the process of undertaking a range of technical work relating to highways, drainage, ecology and build heritage, which will further inform the design process and identify any mitigation required to ensure the development causes no undue harm to the area.”

Meanwhile, a new principal point of access will be created to serve the development at Rathfriland Road as part of the plans.

The development will also connect with the Woodvale residential development to the north and a 10m wide buffer area is included between the development and the water-course to the west.

Once complete, the supporting documents will be submitted with the planning application and the Pre-Application Public Consultation Report to Lisburn and Castlereagh City Council for consideration and determination.