'A track up the mountains would have a better surface' 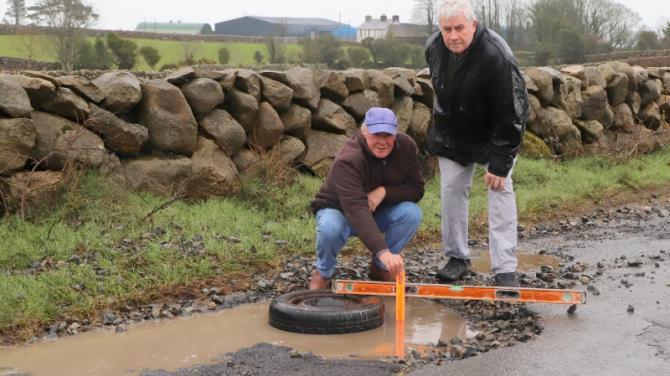 A KILKEEL man has bemoaned the current state of his road which is blighted by potholes.

Leitrim Road resident, Kenny Graham says motorists using the road are facing problems because it is so poorly maintained.

He says the road is in such a bad state that it needs to be completely resurfaced before there is an accident.

Kenny said: “I have been living on the Leitrim Road all my life and this is the worst I have ever seen the road with so many potholes. There is one really bad one which stretches half way across the road.

“They are getting increasingly worse over time on the whole road and have been there for around eight months now.

“These potholes are actually the length of the road but there are two or three really bad ones.”

The Mourne man says although he is aware of the potholes, other motorists who don’t know the road are left completely in the dark.

Kenny continued: “These potholes are not marked out so people cannot see them clearly at all.

“It is a busy road even though it is quite rural, I would say there are around 30 houses on the road in total.

“There is a lot of people who are affected and I know a few other neighbours who have actively been trying to get this sorted too, but nothing has been done.

“I feel sorry for people who come onto the road and don’t know about them, they could badly damage their cars and damage their tyres.”

Kenny, who has contacted the relevant authorities regarding the road, wants to see all the potholes filled.

“With these potholes the more it rains the worse they just keep getting. Something needs to be done as they are just getting bigger and bigger.

“I plan to put more pressure onto council to get this problem sorted and although I haven’t damaged my own car, I thought I would highlight the issue to let other people know about it.”

Meanwhile, DUP Mournes Councillor Glyn Hanna visited the Leitrim Road on Saturday and said he “could not believe the state of the road”.

“The residents are angry and frustrated and believe the Leitrim Road has been forgotten and I agree. A track up the mountains would have a better surface.

“When I was at the massive pothole on Leitrim Road it was raining, which made the situation extremely dangerous, as you could not see the pothole and the bad condition of the road surface.

“This could damage vehicles which is expensive to repair or on a bicycle, you would certainly fall off and certainly get hurt. The Leitrim Road is little better than a Third World road.

“The only road I can remember as bad as this lately was the Ballykeel Road, near Ballymartin. I lobbied to get it repaired... and the Ballykeel Road is in good shape now. The Leitrim road is every bit as bad, if not in a more dangerous condition.

“Roads Service in Newry say the money in this financial year is gone for repairs. But this road needs repaired before people are hurt or serious damage to vehicles is caused.

“I will be lobbing to make sure the Leitrim Road is repaired, and sections resurfaced as soon as possible, in the new financial year. The people on this road deserve better.”