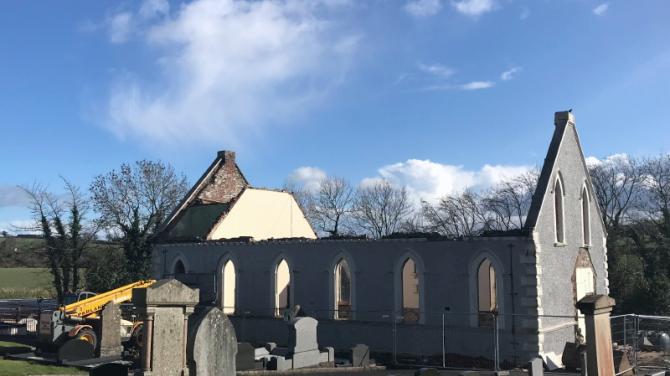 THE former building of Ballydown Presbyterian Church is in the process of being demolished.

Dating back to 1904, the former church on the Castlewellan Road is set to be completely toppled in around two weeks’ time.

Ballydown Presbyterian Church acquired a new state-of-the-art building back in January 2014 after the existing church did not have the capacity to cater for the growing congregation.

Rev Liam Rutherford, minister of Ballydown Presbyterian Church since 2010, says demolition of the original building marks “the end of an era”.

He added: “The old church is currently being taken down completely. We haven’t used the building in five years, since the new one was put up which sits around 40 yards from the old one.

“Works to take the building down started six weeks ago and should be finished in around two weeks’ time as they are progressing well.”

Rev Rutherford said the original church would have needed “a huge amount of money” spent to bring it up to modern day standard.

“There wasn’t proper heating inside the church, there were problems with disabled access and no toilet facilities in the building. Also ongoing issues with the roof and reported woodworm too.

“The old building seated a congregation of 200 whereas today we are seating around 360 people every Sunday, so there has been a big increase since then,” he added.

Two original stained windows that were donated to the 115-year-old church have been retained and will be placed in storage for future use.

Rev Rutherford says the site of the old building will be turned into grave spaces once it is demolished.