Last orders for The Old George 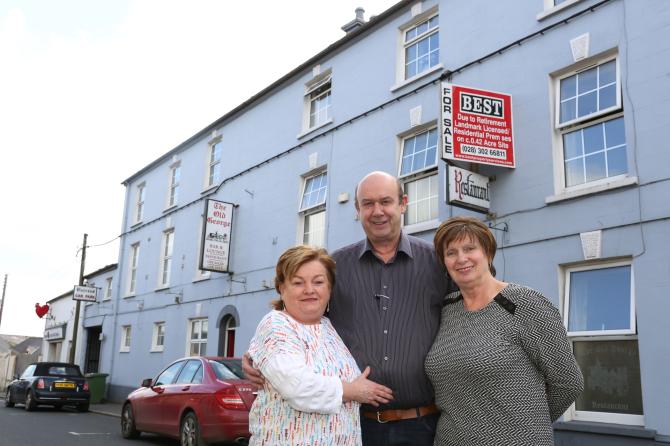 Flo, Alan and Margaret pictured outside The Old George in Rathfriland which will close its doors this weekend.

IT’S the end of an era for the Old George Hotel which will call final orders on Saturday.
Owners of the popular hotel and restaurant in Caddell’s Lane, Rathfriland have made the decision to say goodbye and retire after 40 years at the helm.
The Old George was put on the market 18 months ago and according to the owners “much interest” has  been expressed in the property.
Co-owner and landlord, Alan Shaw is hopeful its doors will not be closed for too long as the sale “is currently ongoing and at an advanced stage”.
The Outlook spoke to Alan and his sister, Margaret Sterritt who took over the reins from their parents Gordon and Ivy Shaw, who became proprietors of the Old George almost exactly 40 years ago on 1 April 1979.
The siblings have run the hotel, restaurant and bar successfully over  two decades with their respective partners, Flo Shaw (nee Dickson) and the late John Sterritt.
Alan and Margaret said they will both “dearly miss” the Old George, but  feel now is the right time to step down. Their decision to close was made at Christmas.
They would like to see whoever invests in  the iconic building to “keep it running as well as it has been” but say ultimately whatever decision is made over  the future for the Old George will be up to the new owner.
This Saturday (6 April) everyone is invited to gather at The Old George for a ‘farewell party’ as the Shaw and Sterritt families prepare to leave.
Their father Gordon Shaw, who passed away on 5 March 2000, hailed from the Castlewellan area.
He was a well-known businessman in the Newry and Bessbrook area for around 20 years before moving to Rathfriland.
In the mid-1950s he was an agent for Silcock’s Animal Foodstuffs and himself and Ivy, originally from Ballynahinch, managed a mini-market in Bessbrook for 19 years before making  Rathfriland their home.
They spent time extensively renovating and decorating  the building and moved into the Old George with Alan, who was 22 at the time, and their younger children, Allison, Gordon and Karen.
Eldest daughter, Margaret, who now owns the Old George with Alan, was married to John and lived in Newry at the time.
The Shaw family made huge renovational changes to the Old George and were the first owners to introduce ‘pub grub’ cuisine to the hotel.
One of the oldest buildings in Rathfriland, the Old George presents an interesting picture of the town’s past.
It was built in 1798 as a residence for the seneschal of the manors of Rathfriland and Gilford, Mr Edward Caddell, attorney.
A seneschal was an agent or steward in charge of a lord’s estate in feudal times.
Caddell’s Lane, which boasts a number of independent businesses, borrowed its name from Mr Caddell and has retained the title ever since.
In the year 1799, Mr Caddell was appointed seneschal by the owners of the manors at that time, the Earl and Countess of Clanwilliam.
Theodosia, the countess, outlived her husband, and bequeathed her estates to her second son, Lt General, the Hon Robert Meade.
In mid-Victorian days, the building superseded the less-imposing Clanwilliam Arms as the town’s main hotel.
With the advent of the railway, it catered for commercial travellers from Belfast and Dublin as well as linen, wool and flax dealers attending the fairs and markets.
It also became the venue for hunt balls and wine and dine parties and the rear of the hotel, now the car-park, was used for horses.
Mr S.A. Peters was also hotelier for a time and after his death, his wife, Mrs A.V. Peters ran the business most successfully for many years.
Upon her retirement the building lay vacant for a short time until Charles McCrum of Newcastle, and his wife, Iris, bought it and set it on its feet once again and the business flourished.
It was the venue for many enjoyable evenings until the Shaw family moved to Rathfriland prompting a new chapter for the landmark business.
Margaret, the eldest Shaw sibling, came to Rathfriland to run The Old George after her mum Ivy, who now lives in Newcastle, retired.
She was living and working in Newry as a nurse at the time and married to husband John who passed away four years ago.
Margaret -  mum of  Anita, Fiona, Nicola and David - moved to Rathfriland in 1995 and turned her hand to any job that was required in the hotel.
She said: “I always did help out at The Old George and worked behind the bar at weekends or holiday times. Whenever I was needed really.
“Dad had been unwell so we moved to Rathfriland and my children got the bus to school in Newry, for them it wasn’t too big of a change.
“Alan and myself have been in partnership from mum retired and it was always good to work together.  Alan and I have always been very close.”

Margaret pictured in the kitchen of The Old George. 14207am

Margaret says running The Old George has been “lots of hard work” over the last 25 years, with many events requiring huge amounts of preparation beforehand.
She says the deaths of her beloved husband John, and dad Gordon, were the worst life events to happen to her while working in the Old George.
“We had The Old George up for sale five years ago but when John died we pulled back from that as it was my life-line and it kept me going and gave me a reason to get out of bed.
“The For Sale sign went back up again about a year-and-a-half ago and I got to the stage where I felt it would be okay that we could sell again,” she said.
Margaret says over the years she has witnessed a number of changes to the building, including major renovation works.
“A  fire  broke out in the decking area four years ago and investigators thought it was down to a cigarette that had smouldered all night. We  had renovation works to do and we have done a lot of work to the place over the years.
“There have been a lot of renovations that have taken place over the years, all the bedrooms are now en-suite and we have 11 in total.
“We have had a few weddings here over the years and also many parties and engagements over the years too. Many milestones have been celebrated here,” she said.
Although Margaret  has “mixed emotions” about leaving on Saturday, she is looking forward to spending quality time with her family.
“I plan to stay with my daughter in Hillsborough and I am going to stay with my mum for a bit too and spend some quality time with her for a while.
“I am ready to see more of my nine grandchildren and my daughter, who has a chip van in Kilkeel, has told me that I can look after it for her when she is on holidays!”
Margaret, who has a love for travel, will  head to Valencia next week  and has other holidays planned.
Meanwhile, Alan came to Rathfriland with his mum and dad in 1979 when he was still working in Belfast for Northern Ireland Electricity (NIE) as a credit controller.
He commuted for two-and-a-half months until he fell asleep going to work one morning and his car ended up in a ditch.
“It was then that I knew I had to make my mind up whether or not I was going to continue with that job or commit to The Old George full time, I decided then that was what I was going to do.
“I had worked part-time when I was at school in the Millvale Arms in Bessbrook and when I left school I was assistant bar manager in the Cumberland Arms, North End, London.
“We moved in on 1 April and opened the doors on 2 April. It was a very busy day and I still remember my first two customers I served who were from Hilltown.
“We have customers that still come in now who were some of the first here when we opened the doors,” Alan said.

Alan married local woman Florence Dickson in 1986 after meeting in The Old George. Together they have a daughter, Annelie, who lives in Abu Dhabi, and son Kyle, who now lives in England.
Alan says the biggest change he has witnessed over the years is a shift in customers’ drinking habits.
“There are so many more people who are drinking at home now. Years ago we would have had a lot of the young ones in before they went to the Belmont or the Coach, we don’t see that as much now.
“We have been here working for seven days a week for as long as I can remember and when Sunday opening started I noticed the working hours shoot up,” Alan said.
The Rathfriland man says himself and wife Flo are looking forward to enjoying their retirement together.
He added: “We will  maybe get out to see our daughter and we haven’t ruled out both getting a part-time job further down the line.
“I would like to start playing golf again and I would like to take up gardening too. I will miss the craic at the bar and all the craic with all the regulars.
“Myself and Margaret would like to thank all the customers and suppliers who have supported us over the years.
“We would also like to give a special mention to all of our dedicated and loyal staff, both past and present.”
Alan says he would encourage everyone to come along and join them at their farewell party on Saturday which will be their last day in business.
“Our last day will be a very busy one with the Grand National and football on too. We expect the farewell party to start around 9pm but we have been saying our goodbyes all week really.
“There has been a mixed reaction to the news that we are closing. People are glad to see that we are retiring and then others are sad that The George will be closing but we are hopeful that we will not be closed for too long.
“I would like to encourage everyone to come along on Saturday to meet old friends and new,” he said.