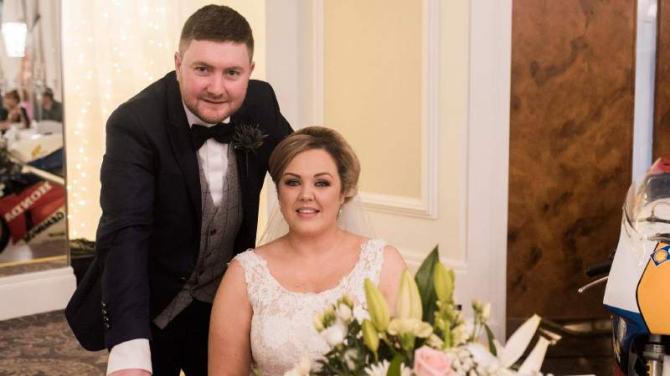 A MONEYSLANE couple duped friends and family into attending their wedding by pretending they were throwing a birthday party!

All 146 guests thought they were there to celebrate Tiarna’s surprise 30th birthday party which fell on the same day.

However, the surprise was on all the guests when they instead turned up to the couple’s secret nuptials!

The couple who have been together for 14 years, and engaged for a decade, wanted to celebrate their wedding by doing something different.

Tiarna told The Outlook how the idea for the surprise wedding came about and the months of secretive planning that followed.

She said: “I was watching This Morning in August last year before I started back to work as a classroom assistant.

“There was a segment on the television where Holly and Phil surprised a couple with money for their wedding.

“All I heard was surprise and wedding and I wondered if I could pull off a surprise wedding to coincide with my 30th birthday.”

Tiarna told Chris about the plan later that day and the idea spiralled from there.

“He thought it was a great idea too. We decided to use my 30th birthday as a cover-up story.

“Planning started shortly after that. We only told four of our close friends and we let our parents in on the secret about eight weeks ago.”

The local couple presented their parents with home-made scratch cards informing them of their plans to wed.

Tiarna said: “When my mum scratched hers, the message asked her if she would walk me down the aisle.

“She was so shocked when we told her that you could have just scraped her up off the ground!

“At first they didn’t believe us, but were absolutely delighted when they found out.”

Tiarna says their two children were delighted when they found out their parents were getting hitched.

“Tommy found out last week to give him time to get used to being a ring bearer and we only told Maisie, who was our flower girl, the night before the wedding. They both cried their eyes out when we told them the news.”

In the months leading up to the wedding Tiarna says her days evolved around secret planning and meetings.

“I sent out surprise 30th invites for my birthday which said formal dress code on the back and Chris pretended to everyone that I knew nothing about it.

“Harry Ringland from the Belmont was fantastic, the hotel was so good at keeping the whole secret running making sure no one found out before the big day.”

The surprise element of the big day was even kept up as guests arrived to the Belmont.

“Even in the Linen Suite of the hotel the secret continued. We had 30th birthday balloons and a slide-show of pictures – just to keep the pretence up.

“Then when everyone moved into the ballroom I think the penny started to drop, just as I was about to arrive.

“However, even then I think some people still didn’t grasp the fact that we were about to get married. There were a lot of surprised faces when they walked into the ballroom and saw the chairs all lined up and the room decorated.”

Tiarna says she’s “still on cloud nine” after her big day and says it was everything she always dreamed of.

She added: “The best thing about the day was the look on everyone’s face. They all thought they were coming to surprise me, but the joke was on them!

“It was just what we wanted. There was no hustle and bustle and no fuss. It was a day just about us as a couple and it was just a lovely family day.

“We are very family-orientated people and the day just summed us up perfectly.

“I am a classroom assistant in Fair Hill Primary School in Kinallen and left on Thursday as Miss Duffy and have since returned as Mrs Cochrane. It’s still surreal!”

The couple are planning to honeymoon abroad later in the summer with their two children.

“It was a fantastic day and one we will never forget. We would like to thank everyone for coming. Chris and I are just overwhelmed by everyone’s kindness and thanks to everyone for keeping the secret who were involved all along!”