Dromore residents ask 'where is our promised play park?' 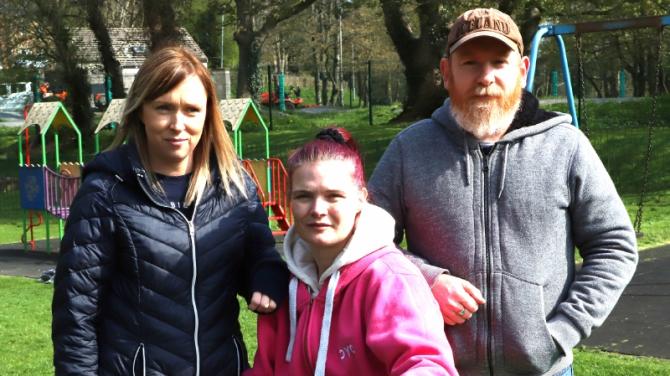 A GROUP of parents lobbying for a new play park in Dromore are frustrated by its lack of progress.

Dromore Play Park Group started their campaign almost three years ago following a gathering at the park to protest about its dilapidated state.

A petition was  compiled by the group demanding the play park facilities on the Banbridge Road needed improved.

Since then, the group has welcomed news that council has earmarked £250,000 for improving the park.

A planning application for a new park was submitted to Armagh City, Banbridge and Craigavon Borough Council in November last year.

The application consists of bitmac and wetpour surfacing, railings, play equipment, bins, benches and associated works for the site on the Banbridge Road.

Consultations to relevant bodies are still ongoing regarding the proposal and, according to the application,  124 comments were received.

The online application states  that 10 of those are objections with 114 supporting the application.

Not everyone is keen to have the park upgraded. A petition objecting to the new park has been set up by the majority of residents from Linen Lane, a new housing development  opposite the existing play park.

The petition, which can be viewed online, has varying reasons as to why residents object to the new park.

These issues include the impact  on the immediate conservation area due to its size.

Other issues raised were the noise levels that would come from the park, fears of anti-social behaviour and general residential amenity and the impact the development would have on surrounding natural wildlife and habitats.

There were issues raised concerning the location of the proposed park and demolition of the existing disused toilet facilities which sit close to the site.

Sean McDonnell from Dromore Play Park Group says objections to the new park have caused “yet another stumbling block” to its progress.

The local man however, hopes Linen Lane residents also get the same benefits from the park that the group is lobbying for.

He added: “Our first purpose was to get attention from council representatives to show from the petition that the existing park needed renewal.

“A multimillion pound capital works programme, to redevelop the entire town park, was proposed to the group at the end of December 2016 but did not meet the requirements they wanted for the play park – the play area was diminished in size and relocated.

“The council has since presented our group with a new playground proposal, that the group has supported, and have separated that from the capital works programme for the town park and an application for the park was submitted to council.”

Zoe Sparks from Dromore started the ongoing campaign in September 2016.

She said: “The place hasn’t been upgraded in more than 20 years and we just constantly seem to be overlooked in Dromore.

“We started the petition in the September of that year and it just took off from there. It got us a meeting with council and we said we were looking an update of facilities. We have had a number of meetings and a consultation but nearly three years later we are still no further on.

“Council at one stage even wanted to move the park closer to the road. There was also a fully functional toilet block area at one stage. It was closed and they gave us a portaloo just beside the road. Other than that the only functioning toilet is in the Square.”

Zoe  no longer takes her young child to the park due to its poor facilities.

“If you are at the park you just can’t leave other kids to take another one to the toilet which is a good bit away. Last week there was dog poo in the play park area itself which is an absolute disgrace.

“A lot of locals now go to Banbridge, Hillsborough or Wallace Park to use their facilities. This is taking trade away from the town.

“We have had so many dates thrown to us about when work was supposed to start. And not one has come to fruition.

Meanwhile, Sean says it has taken so long for work to the park to begin that the Linen Lane development was constructed in the meantime.

He added: “This new housing development sits adjacent to the park and objections have since come from the majority of residents there. This has been another huge stumbling block for us.

“However, we have also had a lot of support and that far outweighs objections at this stage.”

The local man has also hit out at the lack of recent communication from council representatives.

“Council has basically stopped talking to us since the application has gone to planning.

“At the single public consultation meeting the council projected to start construction in November last year but that has not happened. This was one of many projected start dates that we had been given."

“We are just so frustrated by all of the delays that we have encountered and also the lack of commitment and progress from council too.

“A pump track close to the park has also been installed since we started the campaign and no one knew anything about it until it was up.

“Elections are coming up in the next couple of weeks too and it will be hard to give local councillors our votes unless they do something more to see necessary development proposals like this in Dromore actually completed,” he said.