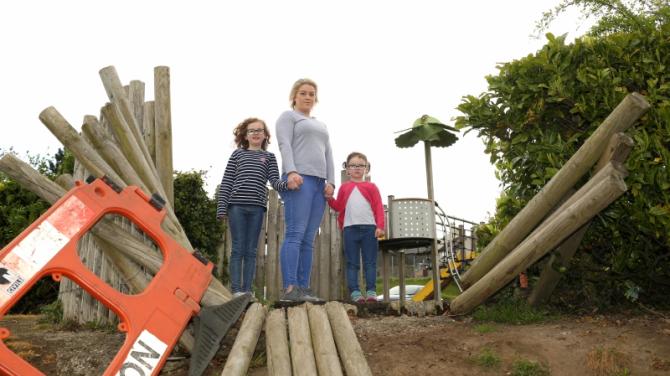 RATHFRILAND Play Park is not a safe place for children to play, it has been claimed.

Registered childminder and mum of two, Gemma Stewart made the remark after discovering damage to the park during the Easter Holiday.

Wooden posts fencing off a drop of several feet were smashed in an act of vandalism.

Rathfriland mum Gemma was one of the first to discover the damage last Wednesday (24 April).

“My daughter Ruby got out of the car and ran off to play. A short time later, she came over to me to tell me about the big drop.

“I was just glad she was okay. There is a big drop down to the green area on the other side, it’s so dangerous.

“That section of the park had been marked with red tape for a while but over the weekend, it has been completely trashed.”

The standard of equipment within the park and its overall safety attracted some criticism.

“The park in general isn’t great. I think it’s the only park in the area that doesn’t have any sort of fencing around the park,” Gemma said.

“There used to be security fencing but it was removed years ago. It’s not as safe as other parks like Banbridge and Newcastle.

“The park backs on to a car park which is often very busy with the community centre traffic, the play school and people parking there to walk up to the doctors’ surgery.

“You just can’t take your eyes off your children for a second. Added to that, there’s the green space to the back and the tennis courts which were in such bad condition, they were condemned.

“The children have the full run of that acreage which really isn’t safe.”

Gemma is mum to Ruby (4) and Eve (8) while working as a childminder for children aged nine months and up.

But she finds the park very limiting: “The equipment really isn’t suitable for any child under the age of four. There is no safe way for them to access the slide and the only thing they can play on are the swing and the seesaw.

“This damage happened in the week when children were off school on their Easter holidays and this park really isn’t fun or safe for them.”

Describing the area as a “wasted opportunity,” Gemma would like to see it redeveloped to cater for the young families living in the growing town.

“There isn’t a green space in Rathfriland so it would be lovely to see the park and green space used better.

“A good park suitable for many age groups with safe fencing and the green space and tennis courts used as a walking track or gardens with picnic tables. Somewhere to really enjoy. At the moment, council really isn’t delivering on leisure and recreation facilities for Rathfriland, in my opinion.”

A spokesperson for Armagh, Banbridge and Craigavon Borough Council said staff have “secured the section of damaged fencing and will carry out the necessary repairs, which include replacing the posts, as a matter of priority”.

“Last year, the council launched a new play strategy for 2018-2026 and pledged as part of its capital works programme to invest £4.75m in upgrading play facilities so that children and young people in all parts of the borough can access high quality, fully inclusive and safe play facilities,” they said.

“Work is ongoing to upgrade play facilities as part of a rolling refurbishment programme with plans in place to enhance play provision in Rathfriland by 2021.

“Initial discussions have already been held with Rathfriland and District Regeneration Company in an effort to engage with the local community and ensure that any future proposals involving the design, layout and choice of play equipment meet local needs.

“A copy of the council’s play strategy can be downloaded at www.armaghbanbridgecraigavon.gov.uk