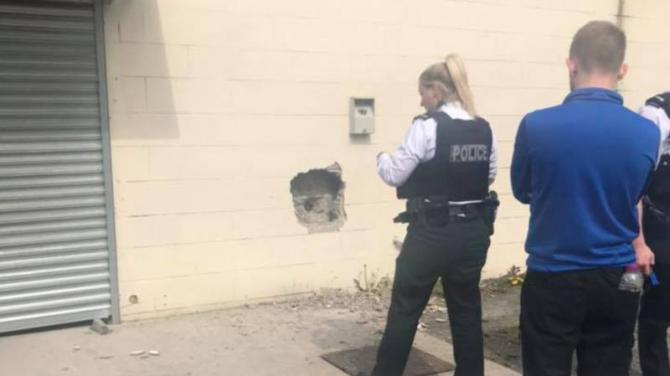 STAFF at a Banbridge-based indoor trampoline park are reeling after a recent attempted break-in.

Jump Boxx on the Waringsford Road was forced to delay their opening hours on Easter Tuesday (23 April).

Would-be thieves attempted to access the warehouse-industrial style building by trying to break through an exterior wall – leaving a large hole in the side of the property.

Police said criminal damage to the wall occurred some time between 2am and 4am on Easter Tuesday.

Scott McMillan, one of the owners of Jump Boxx and new sister company, Ninja Boxx at The Boulevard, says the discovery was “gut wrenching”.

Mr McMillan told The Outlook he wants to “make it very clear” that very little cash, apart from a small float, is kept on the premises on a day-to-day basis.

The business owner explained what had happened and how some of his young staff members have now been left “nervous” after the attempted break-in.

He said: “Given the layout of the building whoever did this has put together what they thought would have been the office area and tried to access it in order to get money.

“My own gut instinct is that whoever did this has been in the building before and done a bit of homework as to where the office is and also where they would be likely to be less spotted by CCTV.”

However, Mr McMillan said the would-be-thieves are unaware CCTV cameras are secured right throughout the facility.

He has also upped security measures around the building with more cameras installed since the recent attempted break-in.

“Neighbouring premises have CCTV cameras and might have picked something up to assist police with their ongoing enquiries.

“We think whoever has done this may have estimated that we had a busy Easter weekend and chanced their arm that we had cash on the premises.

“Our CCTV footage shows that it took them two-and-a-half hours to try and get in, it really wasn’t worth it for what they achieved.

“The building is in the style of a warehouse and it has very robust concrete double enforced walls.

“We also have cameras all round the property due to the nature of our business with families and children for their security.”

Mr McMillan, whose business has been located on the Waringsford Road for three years, says he is “disappointed” by what has happened.

He added: “We have had to deal with a loss of revenue and we had to cancel a couple of sessions too, but it was more of a hassle for our customers.

“We had people arriving and unfortunately on that morning we couldn’t facilitate them, this was not good because these people had travelled to us.

“We are not an international company by any means so it is very disappointing that a small local business like ourselves would be targeted.”

Thirty people from across the local area are employed across Jump Boxx and Ninja Boxx.

Mr McMillan says a number of his staff are still reeling from what happened.

“We do employ a lot of young staff and incidents like this make them nervous as to what they will come across when they are opening up or locking up the building for the day.

“Our staff have definitely been shook up by what happened. On the morning of the incident, the police wanted to go into the building first before anyone else, just to be sure that whoever did this was not inside and this thought has put the younger staff on edge.

“We have been here three years and this is the first time we have had anything of this nature happen to us.

“We don’t keep cash on the premises and we would very much like to get that point across. We operate a booking system and payment is made online.

“We carry very little cash on the property, just a small float for the cafe,” he said.

The business owner has also reached out to the local community to thank them for their support following the incident.

“Over 28,000 people have viewed our post on social media and we have had lots of messages of support from both local councillors and the community which we are grateful for.

“We have also already had a contractor out to repair the damage quite quickly after it had happened.

“The police are now dealing with the situation and we would like to apologise to those customers who arrived and could not enjoy the facilities at that time,” he said.

Meanwhile, police said they are continuing to appeal for information following the attempted break-in.

Sergeant Mel Gibson said: “It is understood that criminal damage of a wall at the premises occurred sometime between 2am and 4am on Tuesday morning.

“Enquiries are ongoing and we would appeal to anyone who witnessed anything suspicious in the area at the time of the incident to contact police in Lurgan on 101, quoting reference number 529 23/4/19.”

Alternatively, information can also be provided to the independent charity Crimestoppers on 0800 555 111 which is 100 per cent anonymous and gives people the power to speak up and stop crime.