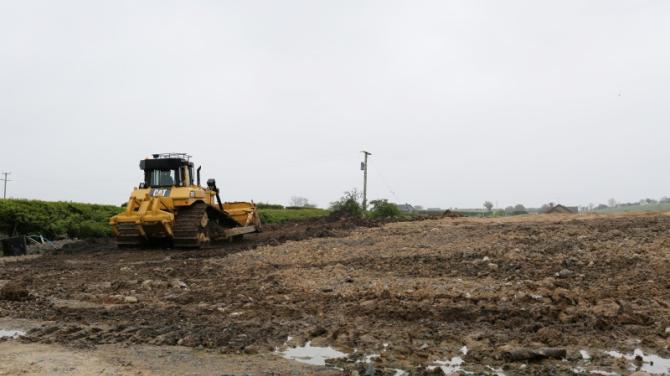 Rathfriland Co-Op members are set to self-fund the building of a new state-of-the-art mart after exhausting all funding avenues over the past four years.

Work has already started on the project beside the current mart on the Island Bog Road off the Banbridge Road.

Mart manager Jim McCrum MBE (pictured) hopes the new farmers’ mart will be finished within the next year.

While the plan four years ago was to develop the entire site, Mr McCrum said they have had to amend and downsize their plans slightly from the plans approved.

“Back in 2015 we were developing the whole site of about four acres. At the minute we are developing about two-and-a-half acres of the site but it will be built in such a way that we can always add to it.

“We have downsized from the original plan, but the new plan will be on a much larger scale to what is here at the minute.”

Plans for an amended and reduced scheme were lodged with Armagh City, Banbridge and Craigavon Borough Council last month.

In addition to the new market hall building with sales ring, there will be new access, floodlights and parking areas.

Since the plans were announced four years ago, Mr McCrum says he is constantly being asked by farmers about when the new mart will be constructed.

The original hope was to have the mart constructed in time for the 30th anniversary in 2017, however, Mr McCrum admits the stumbling block has been funding.

“The past four years have been frustrating. We have exhausted all avenues of funding for the original plan, there was nothing available.

“We could wait for another few years to get something but you could be waiting forever so we have taken the decision that we are going to fund the new build ourselves as we are getting no assistance from anybody. We hope this news will give the whole farming community a lift.

“We are able to start work immediately as we are working on our old plans so we have the bulldozers on site at the minute and we hope to get these revised plans passed fairly quickly,” he said.

The existing mart building and canteen facilities will remain within the revised plans.

“We hope to have it completed in less than a year as we have really outgrown our current mart.”

Ten days ago, over 400 cattle sold during the weekly Friday sale. The mart holds two regular sales per week, a weekly sheep sale on a Tuesday evening from 6pm-11pm and a weekly cattle sale on Fridays from 9am-6pm.

“The actual building of the new mart will be the last thing to be constructed as we will be making the car parking and changes to the road alignment before that takes place.”

In the plans, it also states that the problem of people parking along the Island Bog Road causing obstruction will “be eliminated” as there will be provision of a major car parking facility to the front of the new building.

This car park will provide 51 parking spaces and further space for tractors and lorries.

“The car park provision not only makes it safer for the farmers who use the mart but also for all other road users who use Island Bog Road,” the planning application reads.

Mr McCrum proudly says that the Co-Op, now in its 33rd year, is definitely “one of Rathfriland’s success stories”.

“People from the north, south, east, and west of all classes go. Everyone talks to everyone and asks no questions,” said Jim.

Consultations have now been issued on the proposal and it will be decided upon by Armagh City, Banbridge and Craigavon Borough Council.