Rathfriland businessman warns others to be vigilant following burglary 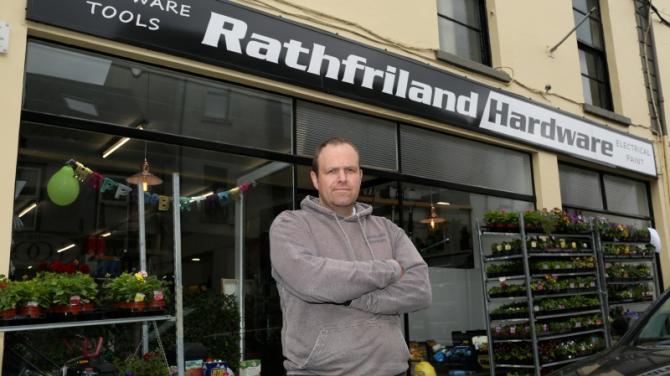 John Murray, proprietor of Rathfriland Hardware spoke to The Outlook about the burglary at his shop premises

A RATHFRILAND business owner has been left feeling “angry and violated” after a burglary at his premises last week.

John Murray, who owns Rathfriland Hardware on the town’s Main Street along with his wife Alison, was alerted by a local resident that someone had broken into his shop.

He received a private Facebook message from the resident to say that thieves had forced entry through the front door of his business in the early hours of Friday, 24 May morning.

Thankfully, nothing was taken from the local business which had just celebrated being open two years in Rathfriland on Tuesday, 22 May.

Still reeling from the recent break-in which was captured on CCTV, John told The Outlook what happened.

He said: “I woke up on Friday morning to a message from a local resident to say that people were in the shop around 3am and that it had been broken into.

“The resident had heard a car coming and stop outside the shop and that it was three or four men in a red Seat Leon.

“Then his mum had seen the men and they spotted her and they had disappeared in the car.

“However, they obviously came back 10 minutes later and forced entry to the front door.”

John believes one of the thieves kept watch at the door while the others came into the shop.

He added: “The one on the street had spotted the resident watching and then shouted down the shop and they fled because they had been caught.

“They didn’t get away with anything and they came in through the office door and were in for a minute or two looking about.”

The men were captured on John’s CCTV wearing balaclavas and gloves and were also armed with a crow bar to prise the front door open.

John continued: “When I got the message a couple of hours after what had happened, I came up to the shop straight away and the door was still lying open.

“I was cross and frustrated by what had happened but also relieved too that nothing was taken.

“I do believe that they were after cash but if that’s what they were looking they came to the wrong shop, as we keep very little cash on the premises.”

The Rathfriland man thanked the local resident for potentially thwarting what could have been a major financial loss to his business.

“Thankfully these thieves did not get anything and I am so grateful to this resident and his family, who live close by for being on the ball and getting in touch with me and being so vigilant.

“It does make you feel angry and also violated too that these people have been in our premises and also the nature of which they came in. It was only by the luck of the local residents or there would have been stuff taken.

“Following this incident I do plan to take more security measures and our camera system will be updated and an alarm installed,” he said.

John also believes the thieves had been in his shop and had scouted the local area prior to Friday’s break-in.

He added: “I looked at the CCTV straight away when I came in to the shop and from what I can gather so far from other comments on Facebook, is that whoever did this was in the town the day before and were spotted looking suspicious.

“I also think they had been in the shop on a previous occasion and knew exactly where they were going to as they headed straight to the office.

“I would encourage other business owners to be vigilant, this is the first time something like this has happened to us.”

Meanwhile, police in Armagh are continuing to appeal for information following the burglary.

Sergeant Morrison said: “It was reported that entry was gained to the premises some time between 3am and 3.30am on Friday, 24 May.

“Enquiries are continuing and we are appealing to anyone who witnessed anything suspicious in the area to contact police on 101, quoting reference number 331 24/05/19.”

Alternatively, information can be provided to the independent charity Crimestoppers on 0800 555 111, which is 100 per cent anonymous and gives people the power to speak up and stop crime.