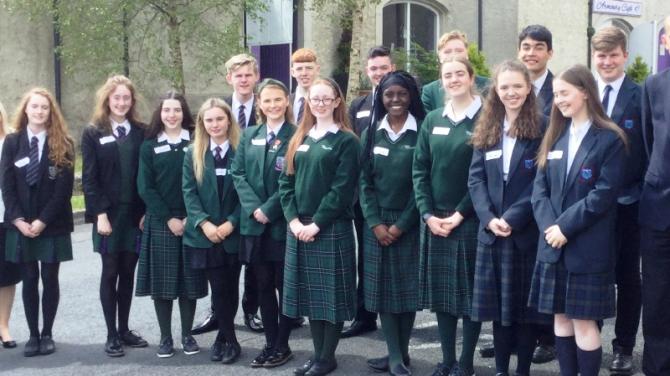 New-Bridge Integrated College pupils recently enjoyed a trip to Glencree, where they got the opportunity to meet Prince Charles and Camilla.

EIGHT New-Bridge Integrated College pupils said they were “thrilled” to meet Prince Charles and his wife, Camilla during their recent visit to the Republic of Ireland.

School principal, Mrs Anne Anderson, Ms Suzanne Harrison, Head of History and the eight students had been invited to attend the event in Glencree, where they also got the opportunity to meet President of Ireland, Michael D Higgins.

The two-day royal visit celebrated the links between Britain and Ireland and their people.

The pupils - Alanna McGrath, Amy White, James O’Hare, Matthew McClure, Kyle Martin, Marco Fusco, Katie McCauley and Ellis Taylor - had the opportunity to speak personally to the dignitaries about British/Irish relations as well as North/South relations within the island of Ireland.

Mrs Anderson said they felt “honoured” to be invited by Eamon Rafter, Learning-Coordinator at Glencree Centre for Peace and Reconciliation, who has worked with the school in recent years.

New-Bridge students shared their reflections on their understanding of British-Irish relations and the future relations across these islands.

Katie McCauley (Head Girl) was asked to sum up the visit in a thank you speech to Prince Charles and President Higgins.

“Our final message is one of hope. We look forward to continuing to meet and talk to our neighbours; to strengthen relationships on the island - north and south - and to celebrate British Irish relations,” said Katie.

“We cherish opportunities to learn from each other and grow together in the spirit of respect and understanding.”

As part of the event, students from the three schools recited the poem ‘The Old Barracks at Glencree’ by Una O Higgins, to the assembled guests.

New-Bridge student, Marco Fusco said he felt very privileged to be asked to read the poem and to be in Glencree on such a memorable occasion.

This commemorative poem, written for the occasion was unveiled by Prince Charles and President Higgins.

Fifteen students from each of the three schools are currently working on a collaborative art project ‘Our Identity’ funded by the Department of Irish Foreign Affairs initiated by New-Bridge Integrated College and led by Mrs Dawn Clarke in the college.

The project has developed new north/south relations and provided opportunities for the students to explore further different identities, traditions and cultures and has also involved trips to Glencree Centre for Peace and Reconciliation.

Mrs Anderson said that she felt very proud to be representing the school along with its students at such a “prestigious event”.

“Our students were excellent ambassadors for our school and will remember this significant event in years to come,” she added.