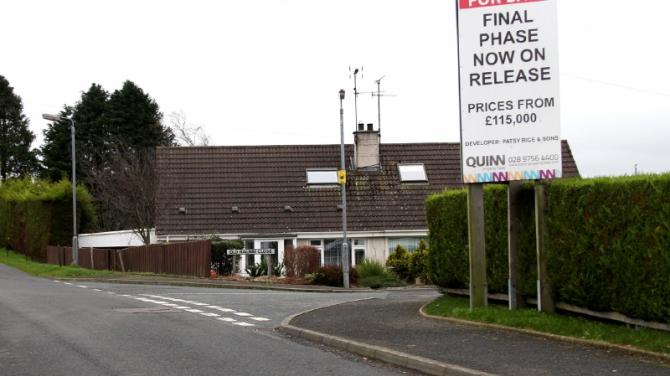 Leitrim builder, Patsy Rice has spoken of his disappointment at council’s refusal of his planning application for the Leitrim area.

A LEITRIM builder has said he feels “disappointed” that the local council refused his application to build six new homes in the area.

Patsy Rice submitted an application to Newry, Mourne and Down District Council in October 2017 with the proposal to build six semi-detached homes to complete the Old Railway Close development.

The decision was made by Newry, Mourne and Down District Council to refuse the application despite demand for affordable housing in Leitrim currently outweighing the supply.

Mr Rice has built houses on this development for the last 34 years and has provided Leitrim village with affordable housing for both the younger and older generations.

Mr Rice acquired the site from Mr FS Herron in 1985 and he provided him with the relevant full planning permission granted for the lands of Leitrim Railway Station.

Mr Herron passed away and the remainder of the site was put up for sale on the open market.

He has also had to install a sewage system to accommodate the development as Leitrim village had inadequate sewage works at this time.

His most recent application was for the site located on lands to the west of 34 and 61 Old Railway Close.

It is comprised of a 0.23 hectare site, which forms the edge of an existing residential development currently under construction.

The development contains a mix of single and two-storey, detached and semi-detached dwellings.

The site is relatively flat, with boundary vegetation on all sides and is within proximity of an adjacent watercourse, but outside its floodplain, however parts of the site are within the predicted flooded areas.

Permission was granted in 2002 at the same site for the erection of 13 dwellings and garages.

Then in 2008 for lands to the rear of the site, permission was granted for the erection of 16 dwellings and garages.

In 2016 permission was also granted at Old Railway Close in Leitrim village, Ballyward for the change of house type for six dwellings and two additional dwellings.

In assessment of the proposal, consultations were carried out with Transport NI, Rivers Agency, NIEA and NIW and no objections were received.

Mr Rice, along with his agent, John Cleland attended a planning meeting in the council chambers in Newry.

At the meeting, reasons were outlined by the planning committee as to why the development was marked for refusal.

They stated that the application site is located outside the settlement limit of Leitrim as designated in the Banbridge, Newry and Mourne Area Plan 2015 and is therefore positioned within the rural area, in that it is located outside the settlement development limit of Leitrim, which was designated to prevent ribboning and encroachment into the Mourne AONB.

The site is also located in the presence of a disused rail track bed within the site and a council policy stated that planning permission would not be granted for a development that would prejudice the future re-use of a disused transport route identified in a Development Plan for transport and recreational purposed and was protected under the policy.

The track has not been identified in the concept plan but it appears that it could be affected by the proposed development.

The site is located outside the fluvial floodplain of Leitrim River, however parts of the site are located within a predicted flooded area.

Neighbours were also notified and there was no objections or representations received.

Council planning officers said having assessed the proposal against various planning policies, it was determined that the proposal is unacceptable in principle and refusal was recommended.

Finally, officers said it would also prejudice the future re-use of a disused transport route identified in a development plan for transport and recreational purposes.

The application was previously presented to the planning committee in January of this year and was deferred.

Following this, information was submitted by the agent in March and referred to the apparent unavailability of lands within Leitrim to cater for demand.

A letter from Quinn Estate Agents was submitted stating that demand has always “outweighed” supply in Leitrim and that the approved building lands at Ballydrumman Road has been inactive for a period of seven years and that Old Railway Close is the desired location for purchasers.

Speaking at the meeting, agent, John Cleland said Mr Rice has a strong commitment to Leitrim village and has built 45 developments over the last few years.

Eighty per cent has been bought by local people and the demand currently outweighs the supply and there is currently a waiting list in place.

Mr Cleland said: “The lands are not subject to flooding and no objections have been received from the public and if these are not completed then people will have to move out of the area.

“It is not a greenfield site and it is the last undeveloped of the station lands and we would argue that it would have minimal impact on the environment and have been designed with a clear purpose.”

Four councillors on the committee voted in favour of the application, three voted against and five abstained from voting.

Speaking after the meeting, Mr Rice told The Outlook he was “disappointed” by the council’s decision to refuse his application.

He said: “I would like to be allowed to develop the final phase of the lands within the boundary of Leitrim station which were purchased and developed in 1985 with the belief of finishing the site in its entirety.

“The proposed final phase of the development provides enough area for six semi-detached dwellings and is still within the site boundary lines and completes the cul-de-sac of the site, where currently these lands are used for storage with no means of agricultural contributions.

“The youngest child in this site is just one month old and the oldest lady will reach 100 years young in October and subsequently lives in the old station master’s house that I renovated.”

Mr Rice said over the years he has enjoyed watching how different people from different backgrounds have made Leitrim village their home and takes great pleasure in knowing he has played a small part in this.

“I have already built 45 homes on the site and this last lot would round the development off and we have 11 families currently waiting on a house.

“The last house on the Old Railway Close that has planning approval will be completed in June and after that there is no-one building,” he said.