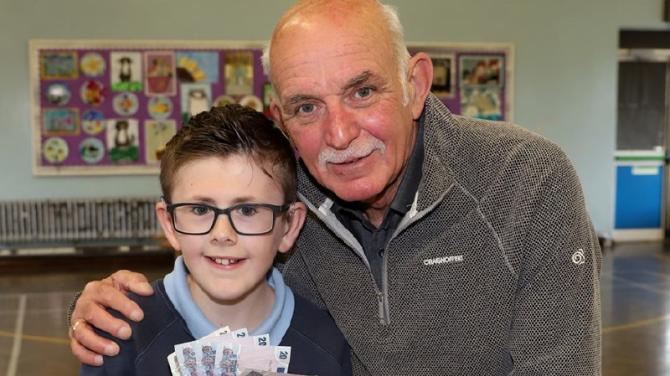 A KIND-HEARTED Kilkeel boy has donated all his spare 20ps to a charity which has supported him since birth.

The condition meant there was a defect in Harry’s veins leading from the lungs to his heart.

In TAPVC, the blood does not take the normal route from the lungs to the heart and out to the body. Instead, the veins from the lungs attach to the heart in abnormal positions and this problem means that oxygenated blood enters or leaks into the wrong chamber.

Harry’s mum, Julie says herself and her husband Glyn only found out their son was poorly after he was born.

She said: “Harry was blue when he was born and it was only then that it was picked up that there was something wrong with him.

“Harry had open heart surgery when he was just two weeks old and we were fortunate at that time because operations were still being carried out in Belfast and he had his surgery in the Royal Hospital and then recovery in the Clarke Clinic.”

Julie says as first-time parents herself and Glyn didn’t know what to expect after Harry became ill. However, the Mourne couple are forever grateful for the support and guidance they received from local charity, Heartbeat-Ni.

It is a parent-led voluntary charity whose aims are to provide emotional, financial and practical support to families who have children with heart conditions.

Julie added: “It was all very overwhelming and was a really worrying time, but we were always supported, especially by Irwyn McKibbin, chairman of the charity and his wife Carol, who visited us one day on the ward.

“We didn’t want to leave the hospital and we wanted to be with Harry 24/7 and Heartbeat-Ni had accommodation just a couple of wards away where we could grab just a few hours sleep.

“Harry then also had a catheter fitted to his heart and a line was put into his groin to check what was going on and he had that done when he was just a few months old.

“This was just to check that the open heart surgery had worked from when he was two weeks old.

“He also developed hydrocephalus, which is fluid on the brain and he had to also get a shunt fitted on his brain, but through all of that he has been a fighter and shown he can do anything.”

Harry, who is “football mad” and a pupil at Kilkeel Primary School continues to battle the odds and enjoy life to the fullest.

“God has been good to us since his surgeries and Harry has been in good health but he is checked all the time.

“That’s the thing with CHD, people think that your child gets the surgery and that’s them fixed, but that’s not the case at all.

“Harry would tire a little easier than others but he is very much a determined little boy and if he wants to do something, he will.

“He is football mad and is a big Chelsea fan and plays for Ballyvea and they are very good and let him participate as best as he can,” Julie said.

Now Harry is at an age where he has been asking about his scars and what happened to him as a baby, the Mourne boy wanted to give back to the charity who supported his family.

Julie added: “Harry took an empty 500ml Coke bottle and was just collecting any spare 20ps he found lying around along with his dad.

“When it was full they then took it to the bank and got £120 for it in notes and handed it over to Irwyn, who Harry has now grown to know very well from all the years of him being involved in Heartbeat-Ni.

“That was the only place the money was going to go to and Harry knows it will go towards helping others who have been through what we have and he is such a kind little boy.”

Julie also thanked Mr McKibbin for the work the local charity has done over the years, including supplying a number of defibrillators to various schools and organisations and a test to measure the saturation of oxygen in the blood of newborns.