It's beyond our wildest dreams 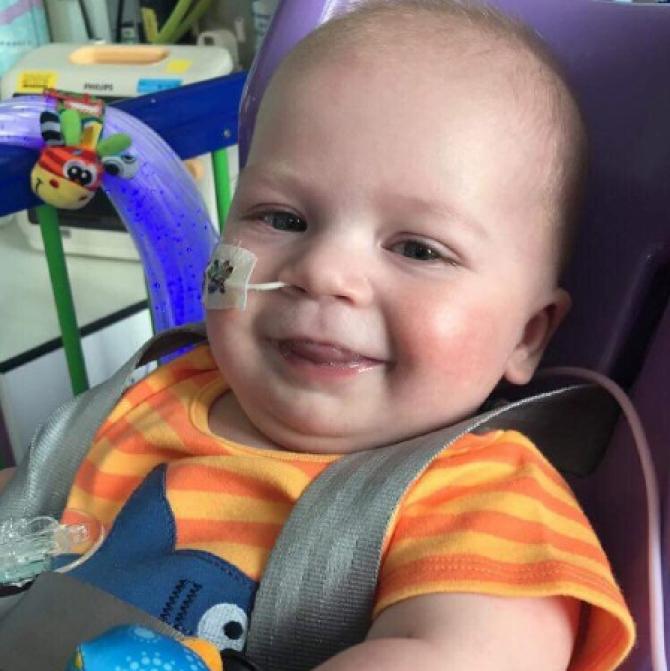 Little Ollie Grant's condition has improved so much recently and he has been weaned off all IV medication, that he has been allowed home to Northern Ireland. The youngster remains on an urgent heart transplant, but could be put on the routine list if his condition remains stable.

KILCOO baby Ollie Grant who is awaiting a heart transplant, has returned home to Northern Ireland.

Eight-month-old Ollie was born with hypoplastic left heart syndrome and is on an urgent heart transplant list.

The only son of Damien and Riona Grant, the local parents were told they would not be allowed home from Birmingham Children’s Hospital until Ollie had his transplant.

However, the family received “the most amazing news” at the weekend that Ollie would be flown back to the Royal Children’s Hospital in Belfast on Saturday (15 June) and could be home in two weeks.

The Grants have spent over three months in Birmingham calling it their “second home” with their two-year-old daughter Aria, as Ollie has battled to stay alive on several occasions.

His condition has improved so much recently and doctors have successfully weaned Ollie off all IV heart failure medication and onto oral medication, that the decision was made that he could come back to Belfast.

The Grants received even more positive news that the decision may also be made to take Ollie off the urgent organ transplant list and transfer him to the routine one if he remains stable.

A transplant for Ollie however, is still his only option due to his poor heart function and leaking valves, as he would not be a candidate for what would have been his next open heart surgery.

Riona told The Outlook: “We got home on Saturday evening around 6.30pm and it is amazing because we didn’t think we would get home until he had his transplant and we were flown home by air ambulance.

“Doctors had tried to take Ollie off IV medication twice before but he didn’t respond well to it and that was in April time and it just didn’t work.

“However, the doctors had been weaning him gradually off over the past two months by decreasing the amount of medication by IV transfusion.

“He was totally taken off it last Monday, so he has been off a week and gets his medication orally now and after two failed attempts we didn’t think it would happen.”

Riona says “it is lovely” to have her family all together back in Northern Ireland and remains hopeful that Ollie can come home soon.

The Grant family, from Kilcoo, mum Riona, dad Damien and children Aria and Ollie, are pictured outside Birmingham Children's Hospital as they prepared to leave for Belfast

“Ollie remains stable with the support of a lot of medication and the Royal is going to keep him for this week and make sure that he stays stable and after that then there is the possibility he could come home.

“We are all still in disbelief and the day our daughter, Aria turned two was the day the doctors turned off all the IV drug infusions and it seems this can happen in a rare occasion and a baby can do well.”

However, despite the recent good news, the Grants are aware that Ollie still has a long road ahead.

Damien and Riona travelled to Newcastle Freeman Hospital on Wednesday, 12 June to sign a consent form for Ollie’s transplant.

There they met the team who will perform Ollie’s surgery if a heart becomes available.

Riona continued: “Since Ollie’s heart function is still so poor he does need the transplant. Doctors are still thinking of moving him from the urgent transplant list onto the routine waiting list.

“The appointment in Newcastle lasted for five hours and was very emotionally draining too.

“We had a lot to take in and we learned too if he comes off the urgent list and onto the routine one, he could just as quickly go back onto the urgent one if his condition deteriorates.”

But the Grant family are determined to enjoy life right now with Ollie, who has already battled against so many odds.

“The decision about bringing Ollie back to Belfast was made prior to our meeting in Newcastle and the doctors didn’t want to transfer us until we had the meeting and while over there they were delighted to hear that he had been doing so well.

“We are still in disbelief that we are back in Belfast and now we just hope to get him home and we have some time together as a family. We have only had that so very briefly to date.

“However, we never try and get our hopes up too much as we have only had 16 days at home together since he was born.

“We probably won’t have Ollie forever but if he gets a new heart we will still have a few years with him and that is what we desperately want.”

The Grant family also made it home in time on Saturday evening to attend a fundraising night for Birmingham Children’s Hospital in Castlewellan.

It had been organised by Damien’s aunt, Ann Grant in Maginns Bar and attracted a huge crowd who wanted to show their support for Ollie.

Riona said: “It was such a surprise for everyone and they were so excited to see us and kept saying to us that we would have to go back to Birmingham in the morning, so they were so shocked when we said that we were back in Belfast!

“Around £4,500 has been donated so far from the evening and there is still more money coming in too. Although we have no idea how much the final amount will be, we think it could be close to around £5,000.

“The crowd was massive and we can’t thank Ann enough for all that she has done and it was a really great night and it was lovely to see everyone after being in Birmingham for so long.

“We would just love to get Ollie home now for the summer. The thought of it is just beyond our wildest dreams!”