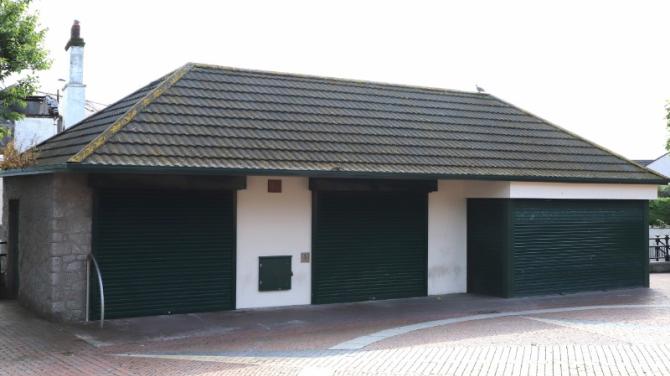 The toilets in the Lower Square, Kilkeel which remained closed over a busy weekend in the town

MINDLESS vandalism to Kilkeel’s toilet block will cost the taxpayer thousands of pounds, it has been claimed.

Kilkeel’s only toilet block located in the Lower Square had to be closed off to the public after its four cubicles were vandalised.

The toilets remained closed as council officials continued to assess the damage and what repairs need to be carried out.

It is understood one of the cubicles has a broken flush, one had a toilet bowl and door ripped off while another cubical had its urinal ripped out.

The latest damage comes after vandals targeted the toilets on three separate occasions on one evening back in March of last year and also caused excessive damage.

A spokesperson from Newry, Mourne and Down District Council said: “Council is currently reviewing the damage caused to the public toilet block at Kilkeel. The council is working to secure a contractor(s) to repair damages.

“The toilets, which are currently closed for public use, will be reopened as soon as all remedial works have been completed.”

Henry Reilly, Mournes Independent Unionist Councillor said he was made aware of the damage on Friday morning.

He said: “This must have happened in the early hours of Friday morning. There’s CCTV in the area but I don’t know if it will have captured anything.

“It is unbelievable that people would go out of their way to do this type of thing and Kilkeel and Annalong are the only blocks that have been vandalised over the years locally.

“I cannot understand why people are so determined to destroy public facilities in Kilkeel.”

Councillor Reilly said the toilet block was initially designed to be “vandal proof” in order to deter such recent crime.

He continued: “It was brought in from Italy and every time it has been damaged council has to go back to the supplier and so everything costs an absolute fortune.

“I had a local plumber who said if council got all the materials he would do the work for free and that is the type of community spirit that we need!

“I know it will cost thousands to fix and I know council were planning to fit metal shutters on the front of the toilets to prevent this happening.

“The toilets close in the evening and so whoever done this actually had to break into them.”

Due to a lack of provision of portable toilets, none were available for the Pride of Ballinran parade on Saturday evening in Kilkeel, according to Councillor Reilly.

“There are so many events being held over the summer and I don’t know when these parts will be available for them to be fixed and it is the only one that we have in Kilkeel now.

“We did have a number of other toilets in Kilkeel over the years, but they were costing council too much to maintain.

“The council decided to keep one at the Lower Square of really good quality. Individual cubicles have been vandalised a number of times but this is the first time the whole block has been out of use,” he said.

Councillor Reilly says repairs to cover the latest damage will come from the public purse.

“The damage will cost the taxpayer several thousands of pounds. Even the signs that show if a cubicle is in use cost hundreds of pounds.

“It is soul destroying for councillors when we lobby in the area for upgraded facilities and then they are vandalised.”

Mournes DUP Councillor Glyn Hanna said he feels “so disappointed” to have to condemn another attack on Kilkeel’s public toilets.

“Whoever is carrying out these attacks are a disgrace. To break flush units, rip toilet bowls out, damage doors and rip urinals out is nothing more than an attack on the whole community and council property.

“These toilets have been attacked numerous times in the last year and the council is spending thousands of pounds in repairs which could be better spent upgrading facilities.

“I am just disgusted with the evil people, who live amongst us, who carry out these attacks.

“There was a band parade on Saturday evening and these toilets were badly missed. Other than shops, bars or hotels, there are no other toilets in Kilkeel,” he said.

Councillor Hanna says he has asked for more CCTV measures to be put in place and is also appealing to anyone who witnessed anything to pass it onto the PSNI or himself.